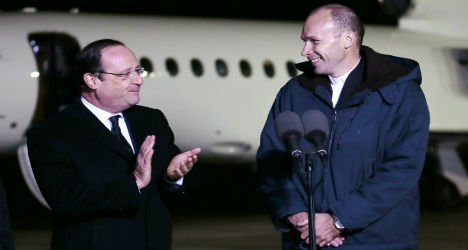 Hollande greeted Georges Vandenbeusch, who was freed on Tuesday, on the 42-year-old's return to Paris.

Vandenbeusch had been kidnapped on November 13 by heavily armed men who burst into his parish at night in the far north of the central African country and took him to neighbouring Nigeria.

Hollande hailed the priest for his "courage" and "self-sacrifice".

However, he also warned other Frenchmen and women in high-risk areas around the world to take care and avoid putting themselves at risk of being abducted.

"We have to warn those who may be at risk in areas where there is danger," said Hollande.

He said this applied not only to "priests who have a mission to accomplish" but to other French nationals.

France needed to be "rigorous" not to allow other hostages to be taken, added Hollande.

Vandenbeusch, who was also greeted by loved ones, said he had not been mistreated by his captors despite being kept in "rustic conditions".

He expressed "great joy" at returning home but said people should remember those who are still being held hostage.

The radical Islamist movement Boko Haram, which has killed thousands of people in attacks against Christians and government targets in northern Nigeria, claimed responsibility for holding the French priest soon after he was kidnapped.

Vandenbeusch described his time in captivity as a period of "terrible boredom, sadness and anger because I'm very fond of the parish where I worked" in Cameroon.

"I was under a tree for a month and a half," he said, explaining that his two main guards spoke a local language and not English, he did not have anything to read, or a radio to listen to.

French Foreign Minister Laurent Fabius, who went to collect the priest in Cameroon, hailed his release as "the best end of year gift".

While the circumstances of the priest's release are unclear, Fabius insisted that France, often accused of paying ransoms for hostages despite stiff government denials, had not paid for the release of the priest.

"The French government does not pay ransoms. There were discussions," Fabius told journalists.

The Vatican welcomed the priest's release and called on the faithful to pray for those still being held around the world.

"We hope that all forms of violence, hatred and conflict in the tormented regions of Africa be stamped out, as well as elsewhere in the world," Vatican spokesman Federico Lombardi said.

In his former parish of Sceaux, near Paris, bells rang on Tuesday to celebrate his release.

"This church prayed for him a lot. Every day, candles were lit. You had to believe in it," said Marie, a 45-year-old worshipper.

In a statement, his family thanked French, Cameroonian and Nigerian authorities and all those who supported them during the ordeal.

"At this time of joy, we do not forget the other French hostages, and are thinking of their families," they said.

There are still six French people being held hostage in Mali and Syria, and Hollande also reiterated his support for their families.

Vandenbeusch was abducted from his home near the town of Koza in northern Cameroon, about 30 kilometres (20 miles) from the Nigerian border.

He was seized by about 15 people who had first gone to the nuns' house, apparently to look for money, giving him time to warn the embassy.

The priest had been advised not to stay on in an area designated as a dangerous zone prone to militancy and kidnappings.

In February, a Frenchman employed by gas group Suez was kidnapped in the same area together with his wife, their four children and his brother while visiting a national park.

They were taken to neighbouring Nigeria and also held by Boko Haram, before being released in April.