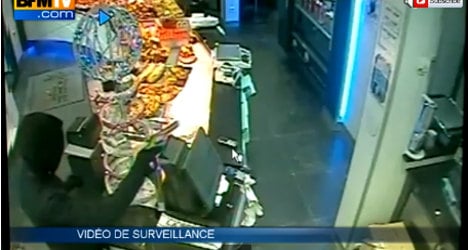 The armed robber points his gun at the woman, who then returns armed with her own weapon. Photo: screengrab BFMTV

France has witnessed a series of incidents in recent weeks where angry shop owners have opened fire on armed raiders in an attempt to protect their stores.

Some of these incidents have even seen robbers shot dead and the shop keepers charged with murder.

On Saturday, a woman working at a boulangerie near Paris was the latest to defend her business against gun-toting raiders, except this time she was armed with little more than a broom.

When the robber burst into Le Petit Duc, in the town of Saint-Maur-des-Fosses, in the southeastern suburbs of the French capital, he chased the petrified woman into the back of the store, before trying to smash open the till.

But not willing to see the takings pilfered by a thief, the woman returned, armed with a broom, and began attacking the stunned robber, as seen in the video below.

He managed to grab her brush as she poked it in his face but was rattled enough to flee from the store, having to smash his way out in apparent panic.

Speaking to BFMTV after the incident, the woman said: “I think he was as scared as I was” adding that it was pure “rage” that drove her to fight back.

Speaking to The Local on Monday the owner of Le Petit Duc said: "What she did was extraordinary, but at the same time she risked her life.

"Any shop workers face with this kind of attack should respond in moderation," she advised.

Police have not been able to track down the robber.