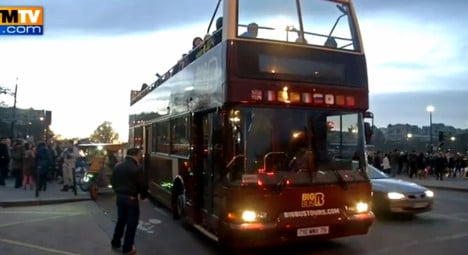 One of the Car Rouges (Red buses), whose drivers have been on strike since Christmas. Photo: BFMTV

Driving a bus load of tourists around the famous sights of the French capital would seem to many like the ideal job, but that is far from the case according to disgruntled drivers.

After Christmas the drivers of one of the Paris sightseeing buses, CARS rouges, walked-out of work in protest over pay and conditions.

“We are badly paid, we don’t get a bonus for working on Sundays, and we don’t get health insurance (a mutuelle),” one of them told France’s BFM TV station this week.

“There are no toilets, no places for shelter and they don’t give us any meal vouchers,” added Icham Tassefkoumte, a representative from the CFDT union.

The workers have been trying to explain their woes to tourists in the capital in an attempt to dissuade them from boarding the buses, which are currently being operated by temporary replacements drafted in by management.

“I wish them courage and I hope their strike gets the results they want,” one visitor to Paris told BFMTV.

The CFDT union, which represents around 80 drivers, say the strike will continue until their demands are met. They are calling for an hourly wage of €13 before tax, as opposed to the current rate of €11.67.

The management of the red buses have so far declined to issue a statement.