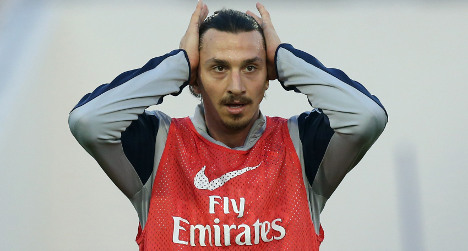 What will become of the salaries of millionaire footballers like Zlatan Ibrahimovic of PSG? Photo:

According to the government of President Francois Hollande, it will affect around 470 companies and about 1,000 employees.

But 13 of those companies are expected to be Ligue 1 clubs and while the government expects to generate €210 million from the tax, €44 million of that will come from football clubs.

"The decision of the Constitutional Council to approve the 75 percent tax is sad news for French football," said UCPF in a statement sent to AFP on Monday.

"UCPF continues to consider this tax as profoundly unfair and anti-economical."

UCPF also called on the government to reform the law to improve "the competitiveness of French clubs".

The law would see high earners such as Paris Saint-Germain's Zlatan Ibrahimovic, rumoured to be on around €14 million a year net, suddenly hit with up to 7 million euros of extra tax to pay.

Given his contract, it would probably fall on PSG to stump up the extra funds but in a league where clubs are already losing money, such commitments could force teams to sell off their top stars and highest earners to balance the books, thus weakening the league on the European stage.