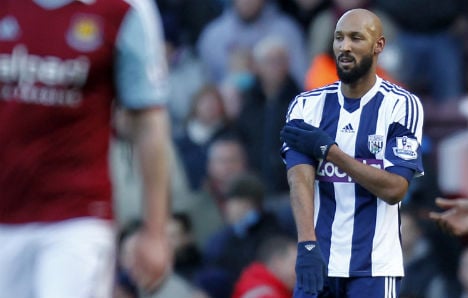 The 34-year-old striker thrust his straightened right arm downwards while tapping his bicep with the other hand after scoring a goal in a game in Britain between his West Bromwich Albion team and West Ham United.

The gesture — an imitation of a salute frequently used by a French comedian friend of Anelka's who has been convicted several times for anti-Semitic public comments — was immediately and widely condemned.

France's sports minister, Valerie Fourneyron, called it a "shocking, sickening provocation" and said there is "no place for anti-Semitism and inciting hatred on the football pitch".

"This salute is merely a lesser known Nazi salute and we expect the same kind of punishment to be handed down by the authorities as if Anelka had made the infamous outstretched arm salute," said European Jewish Congress president Moshe Kantor in a statement.

Online, a storm brewed, with some Twitter users calling Anelka, a former member of France's national team, "loathsome" and "racist".

Anelka himself took to Twitter to try to defuse the row, saying in messages in French and in English: "This gesture was just a special dedication to my comedian friend Dieudonne."

West Bromwich Albion's coach, Keith Downing, echoed that in a post-match press conference in which he said the footballer was "totally surprised" by the backlash.

Anelka's salute, Downing said, was "dedicated to a French comedian he knows very, very well… He is totally unaware of what the problems were or the speculation that has been thrown around."

The French comedian in question is Dieudonne M'Bala M'Bala, who has outraged French authorities and Jewish organisations many times with his frequent anti-Semitic tirades. He has been fined seven times for defamation, insult and provocation to hate, and for racial discrimination.

The comic, widely known by his first name, has popularised the straight-arm gesture, which he calls a "quenelle" — a balled food item made of fish or meat.

The salute, said to look like a mix of a downward Nazi hail and an obscene French movement meaning "Up Yours", has been adopted by many of Dieudonne's fans, though interpretations vary as to whether it is anti-Semitic or anti-establishment.

Dieudonne himself is linked to some radical figures, notably to the former leader of France's xenophobic National Front party, Jean-Marie Le Pen, who is also godfather to one of his daughters.

Although Dieudonne's stage shows no longer get play on mainstream French media, the comedian still has a solid following for his Internet videos and at his performances.

The minister wants to break Dieudonne's "mechanics of hate" and end the comedian's assertions of protection under freedom of expression, they said.

Valls judged Dieudonne was "no longer a comedian" but was rather an "anti-Semite and racist" who fell afoul of France's laws against incitement to racial hatred.

But Dieudonne's lawyer, Jacques Verdier, told AFP that there was no risk of the comedian disturbing public order.

"In the years that Dieudonne has done his shows, there has never been the slightest incident," he said.