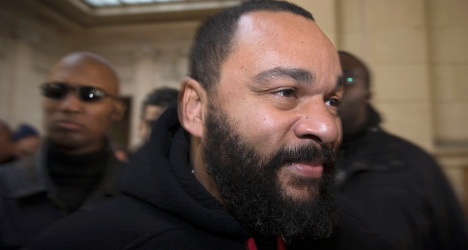 French comic Dieudonne Mbala arrives for a trial at the Paris courthouse on December 13th on the charges of defamation, insults, incentive to hate and discrimination. Photo: Joel Saget/AFP

France’s Interior Minister Manuel Valls announced on Friday that he was considering banning performances and public meetings held by French comedian Dieudonné M'bala M'bala because of his alleged “racist and anti-Semitic remarks”.

Dieudonné is no stranger to controversy. He reportedly invited Holocaust denier Robert Faurisson onto his show several times and once wrote a song entitled “Shoa nanas” – a play on the words “Shoah” and “ananas” (pineapple).

Indeed, the comic has already been condemned in court several times for anti-Semitic remarks. But this hasn’t deterred him from stirring up further controversy, and he now faces a possible ban from performing altogether.

“Despite condemnation for defamation, insults, incitement of hate and racial discrimination, Dieudonné M'Bala M'Bala does not seem to bother about [respecting] any limit,” said a statement from France’s Interior Ministry.

“In these conditions, the Minister of the Interior has decided to study seriously all the legal channels to allow the ban of public meetings which no longer belong to the creative dimension, but which, with each new show, contribute to an increased risk of disturbing public order.

“From one declaration to another, as demonstrated by many television programmes, he attacks the memory of the victims of the Shoah in an obvious and unacceptable way,” the statement continued.

This decision was welcomed by Roger Cukierman, President of the Representative Council of Jewish Institutions in France (CRIF).

“It’s going in the right direction because if things had been left the way they were, there could have been violence,” Cukierman told iTele. “It’s time that Mr Dieudonné, who is not at all a comic, was silenced. He’s become a trader in hate.”

According to Le Point, the possible ban was sparked by a documentary broadcast in mid-December on France 2, in which the comic was caught on hidden camera making offensive remarks about Jewish France Inter presenter Patrick Cohen.

“You know, if the wind changed, I’m not sure he [Cohen] would have time to pack his suitcase,” Dieudonné was filmed saying.

“You know, when I hear him speak, Patrick Cohen, I say to myself: you know, the gas chambers…shame,” Dieudonné concluded.