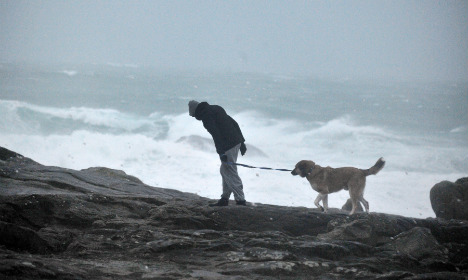 In Britain, a man was found dead in a swollen river in northwest England where the water was "fast flowing, and a lot more water than normal", said Inspector Chris Wright of the Cumbria police, adding: "It's fair to say that the weather contributed to the problem."

The other fatality was a woman swept away in a river in north Wales, police said.

A Russian man was also feared dead after falling overboard from a damaged cargo ship off the northwest French coast about 220 kilometres from Brest.

Rescue workers called off their search for him after scouring the area late Monday.

The Atlantic maritime authorities said the man fell into the sea as winds packed nearly 120 kilometres per hour, and swells reached up to seven metres.

A passenger aboard a Brittany Ferries vessel suffering intense spinal pain because of the rough seas also had to be evacuated by helicopter to Brest, the maritime authorities said.

Across north and northwest France, about 90,000 homes lost electricity, said French utility ERDF, and air and rail traffic was disrupted in the Brittany and Normandy regions.

The Met Office, Britain's national forecaster, issued amber warnings for rain — the second-most-severe level — for much of the southern half of England and Wales.

In all, the French weather service has put 23 departments on orange alert — its second-highest level — for high winds and waves.

Around 30 flights from London's Heathrow airport were cancelled, most of them short-haul routes to Europe.

Britain's train companies reduced or cancelled some services, with some of the busiest lines, such as the one linking London and Birmingham in central England, forced to operate under speed restrictions because of the conditions.

However, ferry services across the Channel from France to Britain were cancelled after an alert that gale-force winds would batter the region.

The south England port of Dover announced Monday evening that it had been forced to close.

"We will continue monitoring the situation closely in liaison with the ferry operators in order to re-open the port as soon as possible once it is safe to do so," said a spokesman.

The Met Office also warned that flooding was possible in southwest England as heavy rain fell on already saturated ground.

Rain and winds also battered Ireland, where more than 5,000 telephone landlines were out of order over the weekend due to high winds.

The weather was also putting a bit of a damper on some holiday activities ahead of Christmas on Wednesday.

Local French officials were advising the organisers of events like Christmas markets and fairgrounds to reinforce their temporary installations.

In London, Winter Wonderland — a miniature theme park and Christmas market in Hyde Park — was forced to close for the day for safety reasons.

A huge "snow dome" around the capital's iconic Eros sculpture at Piccadilly Circus deflated during the high winds, reportedly after it was pierced by the figure's bow, showering the central London square in fake snow.