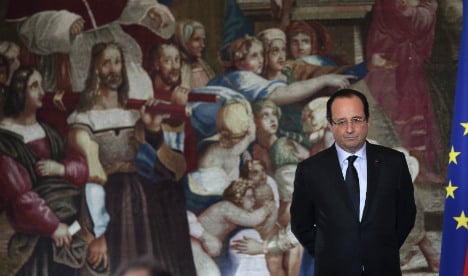 The controversy erupted after Hollande joked during a speech last week to the CRIF Jewish representative group that French Interior Minister Manuel Valls had just returned "safe and sound" from a trip to Algeria, and "that's already a lot."

The comment sparked widespread outrage and front-page headlines in the Algerian press.

Hollande's office on Sunday said his remarks were "the subject of unfounded controversy" and that he expressed "sincere regrets for the interpretation of his statement."

"The subject is closed, I truly believe that all has been said," French government spokeswoman Najat Vallaud-Belkacem said.

France's interior minister on a visit to Madrid also declared that the controversy over the joke "was behind us".

"Obviously there was no risk and Francois Hollande's words were not an expression of any type of risk at all," Valls told reporters when asked about the affair.

"This controversy, if there was one, is at any rate behind us," he added.

At the same time a top lawmaker in Hollande's Socialist party, Bruno Le Roux, said in a radio interview that despite the uproar "relations have never been as good with Algeria".

Algerian Foreign Minister Ramtane Lamamra initially called Hollande's quip "regrettable" and said it ended the year on a "bad note", but later declared himself satisfied with the French president's apology.

France and Algeria have close ties but also a troubled history, after Algeria broke from French rule in a 1954-62 war that left some 1.5 million Algerians dead.

Hollande, who polls show is among the least popular French leaders in modern history, also came under some fire at home for the joke.

Far-left leader Jean-Luc Melenchon said the joke was "nauseating", while Valerie Pecresse of the main opposition centre-right UMP party said it was "especially clumsy" and "not worthy of a president of France".