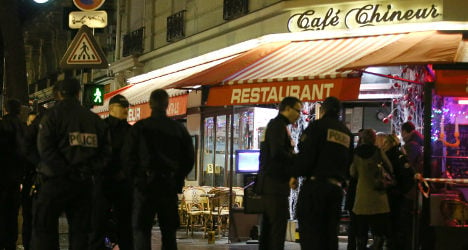 Police investigators stand outside Café Chineur, in the 14th arrondissement of Paris, the scene of a "mysterious" double murder on Sunday night. Photo: Kenzo Tribouillard/AFP

A man and a woman were shot dead at a Paris bar on Sunday evening by a gunman who then fled on foot, police said, labelling the crime as "mysterious".

The two were shot at point-blank range with one bullet each as they were in the outside terrace of the bar in a residential part of the French capital's southern 14th arrondissement, or district.

They tried to take refuge inside but the man died at the scene and the woman died as she was being taken to hospital, said police investigator Jean-Jacques Herlem.

Herlem called the shooting "mysterious" and said police did not yet know the motive.

"All hypotheses are obviously open. The investigation has just started," said a source close to the probe.

The identities of the victims were not immediately given.

The police crimes squad was handling the investigation. There was a heavy police presence at the bar where the shooting took place, the Cafe Chineur, which stands at the corner of Rue' d'Alesia and Rue Raymond Losserand.

"I saw a trail of blood that went from the entrance to the inside" of the cafe, said a local resident named Damien, who lives across the street.

One resident of the neighbourhood took to Twitter to share news that shots had been fired outside the bar, and police and emergency services had arrived on the scene, as viewed in this photo.

A leading candidate for Paris mayor who lives nearby, Nathalie Kosciusko-Morizet, went to the scene after learning of the shooting from friends.

"My children go to two schools in the neighbourhood. I'm shocked," said Kosciusko-Morizet, who is running on the ticket of the UMP party in polls set for March.

"It's impossible not to make the connection with the growing concerns over security issues, even if we don't know anything at this stage," she told AFP.

France occasionally sees deadly score-settling by armed criminals in bars, most often in southern cities such as Marseille, but sometimes also in Paris, though in places well away from the heavily policed centre favoured by tourists.