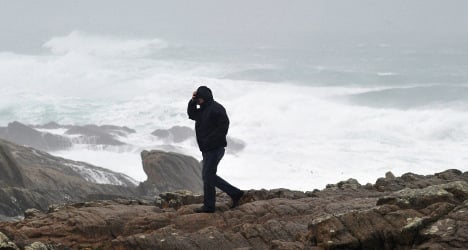 Storms in the north of France caused Channel ferry crossings to be cancelled on Monday and Tuesday. Photo: Frank Perry/AFP

The stormy weather battering the north of France and the south of the UK forced several Channel ferry crossings to be cancelled on Monday due to rough seas. With winds of 130km/h recorded off the coast of Finistère in Brittany it was inevitable that transport would be disrupted.

LD Lines cancelled boats between Le Havre and Dieppe to Portsmouth on Monday and Tuesday. The 12pm crossing between Saint-Nazaire and Gijon in northern Spain was also cancelled.

Brittany Ferries has also been forced to cancel crossings from St Malo in Brittany and Ouistreham in Normandy to Portsmouth. A departure from Cherbourg to Portsmouth is however set to leave at 10.30pm on Monday.

The service between Roscoff, in Brittany and Plymouth has been cancelled but the crossing from Plymouth to St Malo will continue as scheduled on Monday.

Earlier residents of the north west of France were braced for severe gales and possible coastal flooding from Monday through to Tuesday, with 14 departments placed on orange alert – the second-highest threat level available.

The departments of Morbihan, Finistère and Côtes d’Armor had already been placed on alert on Sunday evening, and on Monday morning France’s national meteorological service Météo France added 11 further departments to that list.

An atmospheric depression which struck the north west of Ireland overnight is set to arrive on the west coast of Brittany at around 2pm on Monday, bringing winds of up to 110 km/h inland, 120 km/h on coasts, and 140 km/h on exposed headlands.

Furthermore, expected heavy rainfall on the west coast of Brittany (up to 40 or 50 mm in 24 hours) could combine with waves caused by strong winds and high tide this evening, to cause flooding on the coasts of Morbihan and Finistère, and in low-lying areas, according to Météo France.