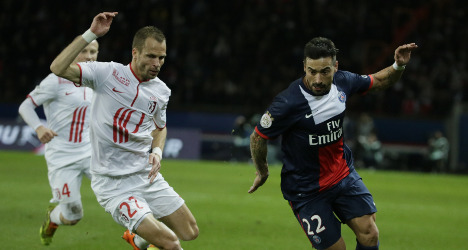 Ligue 1 leaders Paris Saint-Germain were held to a 2-2 draw at home by Lille on Sunday after a late own goal handed Laurent Blanc's side a deserved draw at the Parc des Princes.

Zlatan Ibrahimovic took his league leading tally to 15 goals from 19 matches with a deflected free-kick on 36 minutes that left Lille's Nigerian 'keeper Vincent Enyeama stranded to put the home side in front.

However, a lapse of concentration on the stroke of half-time led to the Lille equaliser.

A teasing cross from the right ran into the path of Lille skipper Rio Mavuba who slotted the ball past PSG's Italian 'keeper Salvatore Sirigu as the teams went in at the interval on level terms.

Ivory Coast international Salomon Kalou then stunned the capital club when he cooly slotted home his 53rd-minute penalty after a foul by PSG left-back Lucas Digne just inside the box.

However a botched clearance from a PSG corner with 18 minutes left forced Marko Basa to steer the ball into his own goal to hand Blanc's men a point which pushes them three points clear of Monaco with Lille a further point back in third.

"I am disappointed with the result but Lille, and before them Monaco, put in fine performances at the Parc des Princes," said Blanc.

"But I have seen the statistics and PSG did not deserve to lose."

Lille coach Rene Girard added: "It's a bit of a shame but they pushed really hard in the second half although we proved we're not in this position by luck."

Second placed Monaco suffered a shock 2-1 home defeat at the hands of struggling Valenciennes on Friday, with Radamel Falcao missing a penalty in his first appearance after almost a month on the sidelines.

Earlier on Sunday, for the second week running, Marseille fought back from two goals down to draw 2-2, sharing the spoils with Bordeaux in an engaging contest at the Stade Velodrome.

It was Bordeaux who seized the lead 11 minutes before the interval when Brazilian forward Jussie headed in from Ludovic Obraniak's corner.

It was Jussie's third goal in as many games but he went off injured at half-time.

Nevertheless, the visitors went on to increase their lead on 66 minutes when Kassim Abdallah failed to cut out a cross at the back post and Nicolas Maurice-Belay pounced to score.

At that point, Bordeaux seemed set for a fifth successive win, but Marseille got a goal back in the 73rd minute, Alaixys Romao scrambling the ball over the line after Carrasso had pushed away a Florian Thauvin free-kick.

And the equaliser followed immediately after, Benjamin Mendy lifting the ball into the box for Andre-Pierre Gignac to convert despite the presence of two defenders.

The French Cup holders are fourth, a point clear of Saint-Etienne and two ahead of Marseille, who lie in sixth place.

"I have mixed feelings after this match," said Anigo.

"We conceded the first goal from a set-piece when we knew that could happen against Bordeaux, and the second goal…it's Christmas, the time for gifts, and we gave them one. And then we score twice but take just a point."

Clement Grenier and Bafetimbi Gomis gave Lyon a 2-0 lead only for Lorient to strike back with two late goals, including an injury time equaliser in a 2-2 draw in Brittany.

Vincent Aboubakar cut the deficit with Lorient's first goal with 31 minutes left before Alain Traore scored with virtually the last kick of the match to snatch a valuable point for Christian Gourcuff's men, which keeps them ninth.

"I cannot explain how we lost these points. I'm not sure we respected the match for 90 minutes and when you don't respect the match, you get punished.

"The second half really sticks in my throat and we took the result for granted," he added.