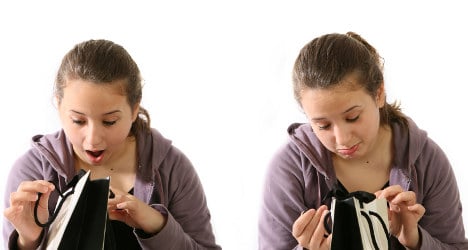 "No, you really shouldn't have." Almost six out of 10 French people are prepared to sell unwanted presents this Christmas, according to a new survey. Photo: Online Trainers/Flickr

At one time or another, most of us have found ourselves unwrapping yet another oversized sweater on Christmas day, and uttering those fateful words: “No – you really shouldn’t have.”

The French are no different, it would seem, and according to a survey published on Monday, nearly six out of 10 will sell off unwanted Christmas gifts this year – an increase from 2012.

“While last year the French were very much divided on the question [of re-selling unwanted gifts], this year it has become the custom,” Olivier Mathiot from French retailer Price Minister-Rakuten told Europe 1 radio.

The survey, conducted by polling firm OpinionWay, found that 57 percent of French adults would be prepared to sell on presents they didn’t want, up from 52 percent last year

What’s worse – aunts, uncles and grandparents throughout France should prepare themselves for the possibility that they will see those carefully-selected Santa socks on eBay, before they see them being worn by their younger relatives.

According to the survey, gift-reselling is particularly rife among the youth, with 63 percent of 18-24-year-olds prepared to do it, and 73 percent of 25-34-year-olds similarly inclined.

And the presents most likely to be resold? Those given by extended family (56 percent), just ahead of those from work colleagues (43 percent).

Gifts from the in-laws were only slightly more popular than those from friends, with a re-sale rate of 27 percent, as opposed to 29 percent.

You might assume that France’s continuing economic crisis explains why hard-up gift recipients might feel forced to cash in on their presents, but interestingly, the survey reveals that financial necessity is even less of a factor than last year (cited by 13 percent  as opposed to 19 percent).

Rather, the most common explanation for re-selling is, quite simply, that the recipient “doesn’t like it” (34 percent), followed by the 29 percent who cited getting the same gift twice, and 28 percent who blamed it on the uselessness of the present.

Anyone doing a spot of last-minute shopping for French friends and family on Monday or Tuesday, take note: CDs, DVDs, video games, decorations, and books make up the most-unwanted presents.

While the French appear to be quicker every year to exchange dud presents for money, they have, at least, retained a sense of shame about it.

According to Monday’s poll, fully 83 percent of those surveyed would make sure never to tell the gift-giver what has become of their present, and 73 percent would be “embarrassed” if they ever found out.