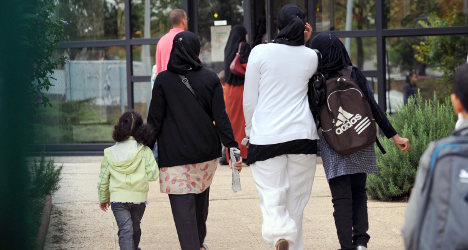 The Council, which acts as an advisory body to the government, ruled that mothers simply offering teachers additional adult supervision on school outings should not be "not submitted to [the requirements of] religious neutrality."

A controversial 2004 law prohibits the wearing or open display of religious symbols in all French schools and colleges, including crucifixes, Jewish skull caps and the Muslim headscarf  – the hijab.

The law was inspired by France’s principles of secularism and equality and the belief that schools and public buildings should be a neutral environment where people are not identified by their religion.

Since a 2011 circular by then Education Minister Luc Chatel, that divisive law had been interpreted as also forbidding women wearing the veil from offering additional adult supervision on school outings.

The issue is one of a handful related to France’s tradition of strict secularism, known as “laicité”, brought to the Council of State in September by the country’s Defenseur des Droits (Human rights ombudsman), Dominique Baudis.

Chatel’s successor, Vincent Peillon, said last week that he intended to “follow French law,” which according to Chatel’s designation, held that parents who accompany children on school trips “are considered to be auxiliary public servants."

That label could make them subject to the same rules and restrictions as teachers in French public schools, but the lack of clarity in the law is what inspired rights ombudsman Baudis to ask the Council of State to intervene in the first place.

Speaking to The Local earlier this year Baudis said: “We are asking the government to clarify the 2004 law over the banning of religious symbols, because it is not clear and it needs updating. We are asking for clarification between the principle of liberty, laid down in the constitution, and that of the principle of secularism, which is particular to France.

“Secularism is very special in France. In the UK, the US, Germany etc it is not the same. It’s a core part of our laws.

“The law was a good thing in 2004, but there are now grey areas that need to be cleared up. We are not in a position to say what that law needs to be, but only that it is blurred when it comes to areas like wearing the veil," Baudis added.

Since the Council is not a judicial body, but rather an advisory one, the Socialist government of President François Hollande is not legally obliged to implement its recommendation to drop the ban.

The de facto prohibition had drawn criticism from several different quarters in France. On Saturday, Catholic Archbishop of Paris, Monsignor André Vingt-Trois warned that France risked becoming a “prohibition society”, due to a “fear of the Other.”

Vingt-Trois also pointed out some practical problems associated with the ban, saying: “There have been some regrettable excesses [in implementing secularism] which have meant that primary school teachers have given up on school outings.”

For his part, Franck Frégosi from the national research centre CNRE, expressed concern that recent developments “are perceived as almost exclusively targeting Muslims.”

Jean Baubérot, a sociologist of religions, warned the government against using secularism as a “catchall” solution to a variety of complex problems, and criticized the veil ban as counter-productive.

“How can we pretend to be helping integration [of immigrant communities], while also refusing these women a role in public life?” he was quoted as asking by French TV TF1.

Monday's opinion from the Council of State came just days after a report on integration, commissioned by Prime Minister Jean-Marc Ayrault, surprised many by recommending the repeal of the 2004 ban on religious symbols in public schools.