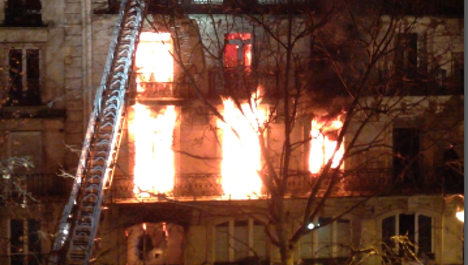 The fire that ripped through a Paris apartment block was caught on camera by a neaighbour named Maurine. Photo: @MaurineB2/Twitter

Residents at the block on Boulevard de Sebastopol in the 4th Arrondissement of the capital called firefighters at around 5.10am to report that a fire had taken hold of the building.

According to Le Parisien around 150 firefighters were sent out to deal with the blaze that quickly spread throughout the sixth floor block, at a time when residents were asleep in their beds.

Around 20 of them were evacuated with three of those admitted to hospital, where their condition is not believed to be life-threatening.

It took firefighters around two hours to extinguish the blaze, according to witnesses living near the block, one of whom, a student named Maurine, captured the fire in several images and a video seen below.

Due to the fire there was widespread disruption to traffic on Fruiday morning in the area around Boulevard de Sebastopol.