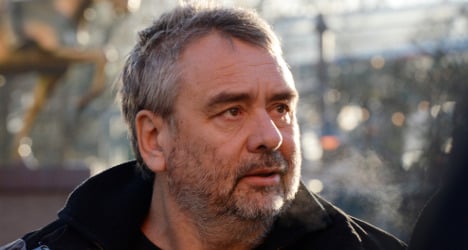 French film director Luc Besson, whose €170 million Film City in Paris is the subject of an investigation by Paris prosecutors. Photo:DPA/AFP

The acclaimed director, producer and screenwriter, known for "The Big Blue", "The Fifth Element", "Taken" and scores of other films, opened the Hollywood-style facilities in September last year, fulfilling a long-held ambition of being able to make a movie from A to Z in France.

The source, who wished to remain anonymous, said late on Thursday that prosecutors had handed the preliminary probe over to the police department in charge of fighting corruption, financial and tax violations, after state
auditors raised a red flag over the way in which the construction of the complex was financed. (Luc Besson at the location for his Film City project, before it was built. Photo: AFP)

According to a report last month in the Le Parisien daily, citing a "confidential note" written by the auditors, these suspect possible "embezzlement of public funds".

But Besson's production firm EuropaCorp, which helped finance the complex, told AFP that "the probe will show that it did not benefit from any embezzlement of public funds, and nor did its directors or shareholders."

The complex is located in the Paris working class suburb of Saint-Denis, in an Art Deco-style former thermal power plant that Besson had used to shoot scenes from the 1990 "Nikita" and the 1994 "Leon: The Professional".

Robert De Niro, Michelle Pfeiffer, Kevin Costner are some of the stars who have shot films there.

The project aims to rival British studios like Pinewood or Shepperton, as well as rising competition from lower-cost eastern European locations like Bulgaria.

At the opening last year, Besson said he had conceived the project in 1997 after being forced – "with a heavy heart" – to spend 18 months in Britain to shoot "The Fifth Element" as there were no adequate facilities in France.

EuropaCorp purchased the site in Saint-Denis in 2006, but the project nearly ground to halt the following year for lack of funds.

The full financing came together in 2008, with France's public financial institution the Caisse des Depots and the private Vinci conglomerate acquiring the office complex, and a group of investors including EuropaCorp financing the studio facilities.