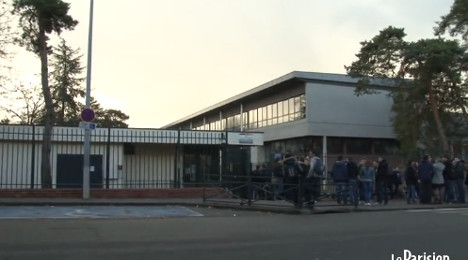 There has only been one topic of conversation among pupils at the Lycée Mireille Grenet in the town of Compiegne, northern France this week.

Earlier in the week news spread that an X-rated film, featuring an actress playing the role of a school supervisor, had been posted online that included several sex scenes, that were shot right in front of the school.

Although the movie, which centres around the outdoor sexual antics of the “supervisor” named Katrina, caused a buzz among pupils, it has angered parents as well as bosses at the school who have threatened legal action against the film's makers, claiming they are the victims of “deception”.

“Although the film was shot outside the premises, our school is easily recognizable,” deputy principal Valerie Queric told The Local on Friday. “The young woman in the film has nothing to do with this school but she is playing the part of a ‘supervisor’, which is why we are so angry. It has sullied the image of the school.

The film was apparently uploaded on Sunday onto the site “Jacquie et Michel” and came to school’s attention on Tuesday, Queric said.

(Screengrab from the film showing the "supervisor" named Katrina)

The story has dominated social media networks in France in recent days and made it into mainstream media, where the coverage has helped boost the number of hits, with the film having been watched over two million times.

“We told them we are investigating the possibility of taking legal action and they have since removed the film from the site. That was the first step, we are still talking to our lawyers to see what further action we can take.

“It is embarrassing for the school ,the parents, the teachers and the pupils," Queric said.

However, the chances of the school winning a court case against the makers of the X-rated production appear slim.

"In this case , the authors of the video remained outside the school , so no offense has been committed ," specialist education lawyer Valerie Piau told L’Express newspaper.