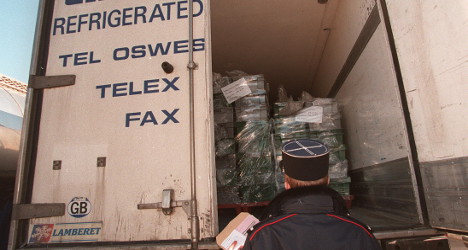 Ten refugees from Eritrea had a lucky escape after being locked in a refrigerated lorry like the one pictured above. Photo: THomas Coex/AFP

French police had to use GPS tracking to rescue a group of African refugees, who were aiming to get across the English Channel to Britain, after they became trapped inside a refrigerated lorry, in northern France.

French police said they received an emergency call in the early hours of Tuesday morning from a man who spoke little English, TV channel TF1 reported.

Thomas Grière from the police command centre in Arras, northern France said: “We just heard him saying ‘help’ and that there were several of them stuck in a refrigerated lorry."

From then on, Grière said, it was a race against time to track down the trapped migrants. Officers immediately contacted a mobile phone communications company to ask technicians to trace the call in order to track down their location.

“The main problem we had was that the truck was still moving, but we managed to trace its journey through signal points along the R42 road between Saint-Omer and Boulogne-sur-Mer,” said Grière.

It was two hours before the truck eventually stopped on an industrial estate in Boulogne, and police were able to find and rescue those trapped inside.

Four men and six women were pulled out of the truck where they had spent several hours trying to keep warm in a temperature of -4°C, TF1 reported.

“They were lucky we found them, because the truck driver was unaware the migrants  were hiding inside and had locked the door as a precaution against theft,” Grière said.

It is believed they had boarded the truck in Strasbourg, eastern France and were intent on getting to the UK via the Channel port of Calais.

After being examined the 10 Eritreans, who have the legal status of refugees, were released.

In August 2012 six Eritreans were rescued in similar circumstances by police from another freezer truck and in June 2000, the bodies of 58 illegal immigrants were found in the back of a lorry at the UK port of Dover.