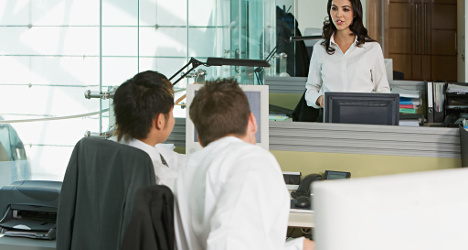 Half of the women claimed to have been the victim of sexism at work. File photo: Victor1558

Égalité may be a principle of the French Republic but it appears it is absent from many workplaces, where sexism has remained stubbornly widespread, a new survey revealed this week.

A staggering 80 per cent of women – and 56 percent of men – say they have witnessed sexism where they worked, according to the report. Meanwhile, half of female respondents claimed to have been the victim of sexism.

The survey, which questioned a total of 15,000 employees over two months at nine large French companies – including SNCF, Orange and Air France – was presented on Tuesday by the Supreme Council for Professional Equality to France’s Minister for Women’s Rights, Najat Vallaud-Belkacem.

These disturbing results of the survey come as no surprise to Marie-Noëlle Bas, the president of one of France's leading equal rights organizations Chiennes de Garde who says they are an accurate depiction of the problem of sexism in France today.

“The great majority of women are harassed in a sexist way at work – if not actually sexually harassed,” she told The Local. “Of course these are two very different things, but they are both very important issues in France,” said Bas, whose organisation famously fought for the term "mademoiselle" to be consigned to the dustbin.

One of the main ways female workers are victims of sexism in France is through language, and the survey revealed the chauvanist expressions that many women have to deal with on a daily basis including:

Half of the women had the impression that they were treated differently at work from the men. This took the form of being given demeaning tasks, or having their competence undervalued, or their power to take independent action restricted.

The overwhelming majority of the women – 90 percent – said they thought it was easier for men in the workplace. And most of the men – 62 percent – agreed.

Bas said however there are signs that sexism is no longer being automatically accepted as the norm, she added.

“People are talking about it [sexism] much more because, for the last year and a half, we’ve had a minister for women’s rights and a council for professional equality.”

Bas says, the French political scene itself constitutes one of the most high-profile examples of sexism in the workplace.

“Women in politics are constantly enduring comments about their hair and the way they dress, or else about who is going to look after their children,” she pointed out. “They’re dismissed as either the mother or the seductress.”

SEE ALSO: The return of the sexist French politician A classic example of this, she says, was back in 2006 when Ségolène Royal, the former partner of the current French President François Hollande was running for President. At the time, Laurent Fabius, France’s current Foreign Minister asked her who would be looking after her children.

More recently, Housing Minister Cécile Duflot was wolf-whistled while addressing French parliament because she was wearing a floral dress and in October Green Party MP Veronique Massoneau was subjected to sexist clucking noises when she presented an amendment in parliament.

According to Bas, one of the main reasons behind sexism today is the lack of female executives in the workplace.

“There’s a glass ceiling, and in general sexism comes from a boss towards an employee.”

So how should one react to sexism in the workplace?

“You should always react but not too aggressively,” she warns. “Smile to show that you have a sense of humour but always tell them to stop.”

However, if someone has insulted you or sexually harassed you then you have the right to report them, she adds.

For France-based business etiquette expert Kara Ronin, the general attitude of women in the workplace is also important when it comes to dealing with sexism.

She recommends using body language to assert authority in the workplace.

"The more confident you appear the more you'll get noticed and the more likely you will get considered for a promotion or a pay rise," she told The Local.

"It is hard if you being overlooked promotions and pay rises but you should also always maintain a positive outlook on your job and on the company," she says. "But whatever you do don't play the victim. You should always be positive and accept new projects that are thrown your way."

At the same time, you should also not be afraid to set boundaries, according to Ronin.

"People are often afraid to set boundaries. While volunteering for things may be good, setting boundaries shows you are strong and have leadership skills. It's also the kind of thing people look for when considering who to promote to a higher level position."

Marie-Noëlle Bas is the President of Chiennes de Garde, a French feminist and equal rights organization. Kara Ronin runs Executive Impressions which provides virtual business etiquette coaching to help people connect better with their coworkers in France. Ronin is also the author of the ebook 'The Ultimate Networking Roadmap: Rise above fear to network with confidence and class!"