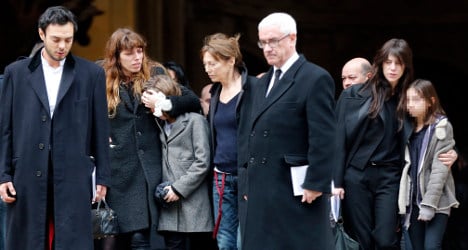 A memorial service for the photographer Kate Barry, daughter of singer-actress Jane Birkin and famed Bond film composer John Barry, was held at a Paris church on Thursday.

Several stars of screen and stage were among the mourners at the Eglise Saint Roch in Paris's first arrondissment on Thursday morning, including Barry's own half sister the renowned French actress Charlotte Gainsbourg.

Barry died on December 11 after falling from her fourth floor Paris flat in an apparent suicide.

The 46-year-old was found beneath her flat in the city's wealthy 16th district last Wednesday evening.

Barry lived alone and anti-depressants were discovered inside her flat, which was locked from the inside, police said.

She was the daughter of British-born Birkin,  best known as the muse and partner of late French singer Serge Gainsbourg, and British composer John Barry, famous for writing 11 James Bond movie themes including 'Goldfinger' and 'Diamonds Are Forever'.

Among those who turned out to say their goodbyes were France's former first lady and singer Carla Bruni-Sarkozy (pictured below) and French actress Catherine Deneuve (also pictured).

(Singer and former first lady Carla Bruni-Sarkozy hides her face as she arrives at the funeral of Kate Barry.)

Barry had studied fashion but turned to photography later. She had suffered from drug and alcohol problems which prompted her to open a centre for addicts near Paris.

Kate Barry had said in an interview that she was fascinated by photography as a child, starting out with Gainsbourg's Polaroid.

"For me it was something miraculous, the image appeared almost immediately," she said.

Birkin and John Barry, who died in 2011, separated in 1967, the year of Kate Barry's birth, and she was brought up until her teenage years by Birkin and Gainsbourg. At the time, they were the most famous couple in France, as much for their bohemian and hedonistic lifestyle as for their work. Gainsbourg, a chronic alcoholic, died, aged 62, in 1991.

Kate Barry was also the half-sister of actresses Charlotte Gainsbourg and Lou Doillon, who was also present on Wednesday.

Barry's body was laid to rest at Montparnasse Cemetery.