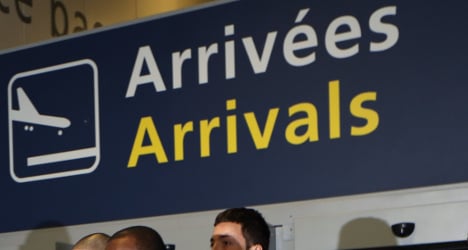 France needs to do more to attract foreigners from abroad to replace those who are leaving. Photo: Thomas Samson/AFP

With more and more young French people seeing their immediate future abroad, fears over the seemingly inevitable ‘brain drain’ and the impact it will have on a struggling economy continue to mount.

The issue of young French leaving has been growing for some time. Earlier this year think tank Institut Montaigne published a poll which revealed that 79 percent of young students at France’s prestigious “grands écoles” universities intend to leave France. Most said they aimed to go abroad for professional reasons, the US being the preferred destination.

Figures like these are often seized upon by the French opposition, who use them as evidence of their claims that President Hollande’s handling of the economy is driving the youth away.

Earlier this year when separate data revealed a 62 percent rise in tax-paying French citizens going abroad Philippe Marini, from the opposition UMP party said: “The departure of tax payers represents a loss of confidence and even a rejection of France."

However France's minister in charge of the French living abroad Helene Conway-Mouret said it was time to stop labelling those heading abroad as "traitors". She intends to push through measures aimed at softening their return.

For his part, Laurent Bigorgne director of the think tank Institut Montaigne says the solution is not to do more to encourage young French graduates to stay but to make France more attractive, so those leaving can be replaced by young foreigners from around the globe.

Here he tells The Local how France needs to do more to attract students and professionals from all over the world.

Bigorgne: “Young people leaving France should not be seen as a tragedy. We are in an open economy so it should not be an issue as long as people are attracted by coming to France, whether it is to study or to work.

“When you lose people, it’s very hard to replace them. It can take a long time and sometimes they are lost forever.

“We need to be able to pull in people from the United States and other countries in Europe and Asia. If not we will have a problem. With young French people leaving it is possible it will open up opportunities for people who have different backgrounds. There are a huge amount of opportunities in France for foreigners.

“But we have two main obstacles. Firstly our universities are not ready to compete with those in the US, the UK and other parts of Europe. Our institutions are not expensive, which is good, but they are not student focused. That is something the directors need to work on.

“Universities have to compete, which is why it was important to pass the law allowing more courses to be taught in English.

“We have the 'grandes écoles' but it is not enough in terms of attractiveness. We do attract students from North Africa and West Africa, the former French colonies, which is good as Africa will become more and more important globally, but it's time for us to diversify and attract students from the US, Latin America and Asia.

“Secondly we have to show these students we have an attractive job market in which they can find work after they have finished studying. We have to show them that if they invest in doing a degree here then we will have jobs for them when they are finished. But this has been difficult."

Bigorgne's view is backed up by a recent global survey of expats by HSBC, which revealed foreigners living in the country do not come here for work opportunities, but for the lifestyle and education and health services (see below).

The good and the bad of being a expat in France 'France does have assets'

Despite its obvious weakness in attracting foreigners, France does have assets that it needs to promote, says Bigorgne.

“We have these big companies in France, that are listed on the CAC 40 stock exchange, like LVMH and Vinci and they are a real asset. The companies will interest professionals and graduates but perhaps the tax system in France frightens them away from coming to work in France.

“In terms of a government policy having high taxes is a huge mistake if you want to attract people to France. You look at other Eurozone countries which have lower taxes and they are attracting French investors and workers. We really do risk losing out to these countries.

“We also know the job market is difficult right now. Unemployment for young people is around 20 percent.

“But let’s not forget France has assets. We have very well-trained people, free education, great infrastructure like public transport and a strong finance sector. We have an attractive country but we don’t play this globalization game well enough. We don’t really tend to look beyond France or Europe.”