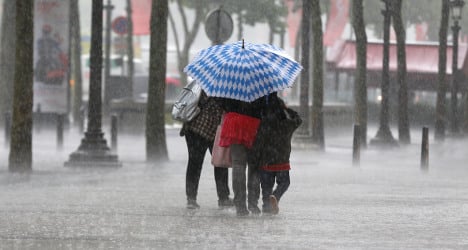 France is set for a wet and windy Christmas 2014. Francois Guillot/AFP

The weather forecast for Christmas in France is in, but it’s not what fans of the festive season would have been hoping for.

According to forecasters from the TV station Meteo News a depression is set to hit France from the Atlantic on Christmas Eve, bringing with it some stormy weather, Le Parisien reported.

The weather front that has kept France relatively mild in recent days is set to be pushed away over the coming days and replaced by a low pressure system that is rolling in over the Atlantic from the north.

So what does all this mean in terms of the weather we can expect?

Well, from December 23 we can expect downpours and gales reaching up to 100km/h around the Loire region in central France. The gusts of wind will be felt even stronger along the English Channel region as well as in Brittany and the Vendée in the west.

The north east of the country is also set to be battered by strong winds.

So if you want a white Christmas in France this year, it looks like you will have to head to the slopes of the Alps or the Pyrenees.