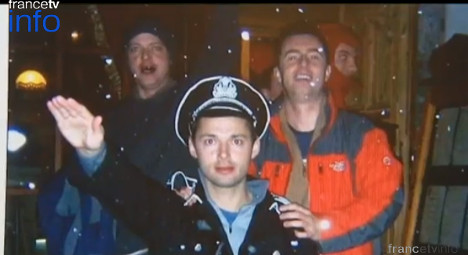 Pictured is Britain Mark Fournier who landed in hot water when he wore a Nazi costume on a stag night at a French ski resort. Photo: Screengrab France Info TV

MP Aiden Burley was dismissed from his position as parliamentary private secretary to Britain's transport minister after newspapers published pictures of the boozy bash and reported that guests had been toasting the memory of Nazi leaders.

The stag, Mark Fournier, was subsequently prosecuted for wearing a Nazi uniform and insignia, which is outlawed in France.

A police tribunal in Albertville in the French Alps will deliver its verdict on January 21, a spokesman for the local prosecutor told AFP.

The controversial party took place on December 3, 2011 in a restaurant in upmarket ski resort Val Thorens.

Fournier, who was photographed in full SS regalia whilst giving the Nazi salute, initially faced more serious charges including denial of war crimes or crimes against humanity and incitement to racial hatred. Those were dropped in favour of a sole charge of wearing the uniform of an organisation guilty of crimes against humanity.

The fine requested is the maximum authorised for that specific offence.

"English law does not consider the wearing of a Nazi uniform to be, in itself, a crime. We can see that from the conduct of Prince Harry," Roubaud told AFP.

"My client's behaviour was not ideologically motivated. It was organised by his best man, the MP, and took place in the context of a boozy stag party.

"He asked his MP friend if it was against the law to wear a Nazi uniform in France and he told him 'no'."

Roubaud added that Oxford graduate Fournier was sacked from his job as a result of the furore and has not been able to find another job.

The lawyer said it was "deeply unfair" that Burley had not been prosecuted alongside his friend given his role in organising the uniforms.

Olivier Fernex de Mongex, speaking on behalf of an organisation that represents holocaust victims and survivors, said Fournier's actions could not be overlooked.

"You cannot classify these acts as a schoolboy joke," he said. De Mongex's organisation is seeking 1,000 euros damages plus interest from Fournier in a civil action brought alongside the criminal prosecution.