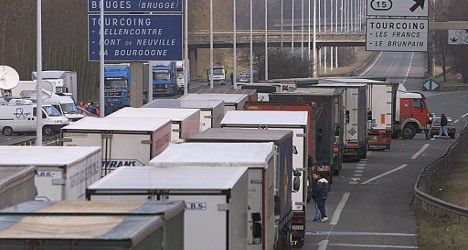 Traffic jams cost the average French household €677 per year, according to the study. Photo: AFP/Philippe Huguen

Traffic jams – or "embouteillages" as they are known in France – cost the average French household €677 per year and France a total of €5.9 billion, according to a new study by Inrix, the main world provider of traffic info services and driving advice.

And according to the company, it’s a problem that affects the majority of French people, with 77 percent of commuters driving to work by car during rush hour.

The study, which was carried out in joint collaboration with the Centre of Economics and Business Research (CEBR), examined the daily movements of motorists in 13 large urban areas.

The study also found that wasted fuel causes a direct cost of €568 million, the time lost €3.5 billion and the impact on consumer prices €1.8 billion.

The situation was even more bleak for motorists in the French capital.

“Traffic jams are costing motorists in Paris more than 60 hours per year on average," according to the report.

"Nearly 2.4 million Parisians use their car to get to the office. Given the high cost of living and especially the precious nature of time in the capital, the direct and indirect costs of these motorists are estimated at €2.9 billion, or about €997 per household concerned.”