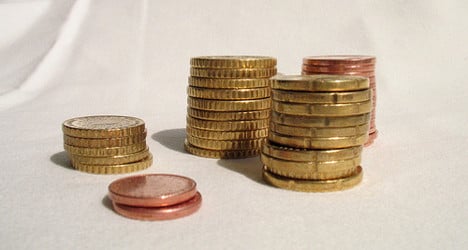 “There’s no Christmas present underneath the tree for France’s 3.1 million minimum wage earners,” was how one French newspaper described the news of the rise on Tuesday.

It followed an announcement by the government that the minimum wage, known in France as “le smic” will be raised by 1.1 percent in 2014.

The seemingly negligible rise has angered trade unions, who were demanding more. France's biggest trade union, the CGT had called for the minimum wage to be raised to €1,700 a month.

Jean-Claude Mailly, leader of Force Ouvrière described it as “clearly insufficient considering the fact that almost 30 percent of part-time employees are on the minimum wage, notably single parent families.”

Before being elected President François Hollande said he intended to raise the minimum wage “to make up for what was not given” during his predecessor Nicolas Sarkozy’s time in office.

In July 2016 he announced an increase of 0.6 percent and the government decided to impose a maximum 0.3 percent rise in January 2013.

But a disappointed Mailly said: “There has practically been no boost (in the smic) at all since this government came in.”

But the government  defended the increase pointing out that at 1.1 percent it represented a rise almost twice that of the rate of inflation, which is at 0.6 percent.

“This adjustment will enable those who are least qualified to maintain their spending power,” a statement for the government read.

France’s minimum wage is automatically adjusted each year on January 1 based on a formula that takes into account rent and energy prices real wages.

According to the newspaper Liberation, the group of experts who advise the government on the annual adjustment to the minimum wage had warned against an increase fearing it would reduce the competitiveness of French businesses.

This panel argued France’s minimum wage “was clearly above that of other countries in the OECD”.

One factor that may help competitiveness of French industry is Germany’s plan to introduce its own minimum wage. However the rate is expected to be set at around €8.50 an hour, a euro less an hour than in France.