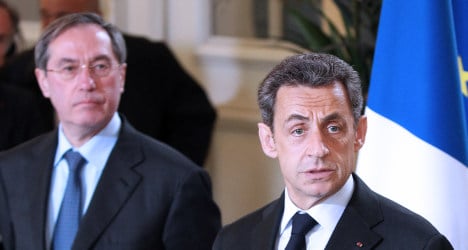 Two of Nicolas Sarkozy's closest allies were held for questioning on Tuesday in a corruption probe threatening to undermine the former French president's hopes of staging a political comeback.

Police sources said Claude Gueant and the former director general of the French national police, Michel Gaudin, were being questioned as part of a probe into the alleged operation of a secret slush fund when Gueant was chief of staff for then interior minister Sarkozy.

Gueant went on to become interior minister under Sarkozy's presidency while Gaudin was appointed to another top police job, the prefect of police for Paris, and is the former president's current chief of staff.

An investigation was opened in June after a government report revealed that Gueant had been handed €10,000 ($13,780) in cash every month from the police budget between 2002 and 2004.

Sources close to Gueant say the cash was not for personal or political use and was used to pay special bonuses to officers assigned to ensure Sarkozy's personal protection, in line with longstanding practice in the ministry.

Police can question the two men for up to 48 hours before making a decision on whether to charge them – a move which would represent a setback for Sarkozy's desire to return to the frontline of French politics in time to
fight the 2017 presidential election.

Right-winger Sarkozy was France's president from 2007 until 2012, when he was beaten by the Socialist Party's Francois Hollande.

Married to former supermodel Carla Bruni, he remains France's best-known politician internationally and, since leaving office, he has concentrated on earning money on the international conference circuit.

The biggest obstacle to a political comeback was widely seen as having been lifted in October when judges dropped a formal corruption charge against Sarkozy in a probe into illegal party financing.

Had the charges been maintained, Sarkozy would likely have had to stand trial in 2014 and a possible appeal the following year, around the time the presidential campaign will begin in earnest.

He would have faced a potential three-year prison term and a ban from public office had he been convicted of accepting money from France's richest woman, Liliane Bettencourt, when she was too frail to know what she was doing.

The decision to drop the charges was hailed by Sarkozy's allies as clearing the decks for another tilt at the presidency and he has made it clear in recent weeks that he intends to re-enter the political fray, portraying the
decision as his duty in the face of the current government's failure to revive the stagnating economy.

Comeback pencilled in for mid-2014

"The question is not whether I want to come back or not," French media have quoted Sarkozy as telling prominent members of his UMP party. "I can't not come back, you understand. I don't have any choice."

One regular visitor to Sarkozy's office in central Paris reports that the 58-year-old's relaunch is being pencilled in for the aftermath of European elections in May, at which the far-right National Front (FN) is currently
forecast to making major gains.

Since Sarkozy left office, the UMP has been beset by in-fighting and it is the FN that has been the primary beneficiary of the Socialist government's unpopularity – a situation which analysts say presents the former president
with a perfect opening to return in the guise of saviour.

Whether Sarkozy would actually be capable of leading the UMP to victory in 2017 is less clear.

Analysts attributed his defeat by the uncharismatic Hollande in 2012 to the fact that key swing voters regarded him as a divisive figure and were put off by the lurch to the right that characterised his final years in power.

Sarkozy also faces lingering uncertainty over the fallout from the outstanding corruption cases in which he is embroiled.

His former campaign treasurer Eric Woerth is one of ten people sent for trial in the Bettencourt case.

Sarkozy is separately being investigated over allegations that he: