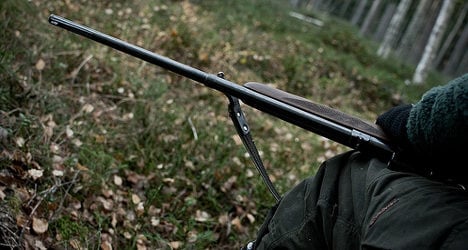 According to reports the boy slipped, causing him to accidentally open fire on his father. Photo: TEKN Photography

Emergency services in Sourribes, Alpes-de-Haute Provence were confronted with a tragic scene on Saturday afternoon.

They had been called out to reports of a hunting accent when a boy mistakenly shot dead his father. But when paramedics arrived they also found the body of the teenager, Le Parisien reported.

The father and son, who were from the neighbouring village of Salignac, had been out hunting on Saturday afternoon when the boy slipped, causing him to accidentally pull the trigger, a source close to the police investigation told Le Parisien. The bullet struck his 42-year-old father.

The distraught 14-year-old then contacted a family member who alerted emergency services, but the father, succumbed to the injuries and died before paramedics arrived.

The boy then committed suicide next to his father's body, according to Le Parisien.

“It’s a hunting accident caused unintentionally by the boy who, realizing the irreversible consequences [of what he had done], turned the weapon on himself and killed himself,” prosecutor Stéphane Kellenberger confirmed, calling the incident a “very sad tragedy”.

Members of the local police force and a helicopter were deployed to the wooded area on Saturday night. Police in Castellane have been placed in charge of the investigation.

Sadly, Saturday's tragedy is just the latest in a long list of hunting accidents in France in recent months, that will give ammunition to those who are calling for a change in the law regarding hunting.

In October The Local reported how a 61-year-old French hunter accidentally killed his own son after mistaking him for a wild boar.

The fatal accident came in the same week that a six-year-old boy died in the north of France, days after being shot during a hunt.

And in September, a 82-year-old deaf hunter wounded two mushroom pickers, one of them critically, after mistaking them for a pheasant.

Speaking to The Local following the accidents in October, the Association for the Protection of Wild Animals (ASPAS), which is campaigning against a ban on hunting on Sundays and for more safety measures to be introduced, denounced the “tragedies that can be added to the list of accidents that is already too long”.

“Hunting needs to be stopped on Sundays, because this is the most dangerous day. There are more and more people heading out into the countryside on a Sunday, whether it's walking, mountain biking or collecting mushrooms. We want an end to it.”

Athanaze also suggested that medical checks be introduced for hunters, to make sure they are fit enough to use a rifle.