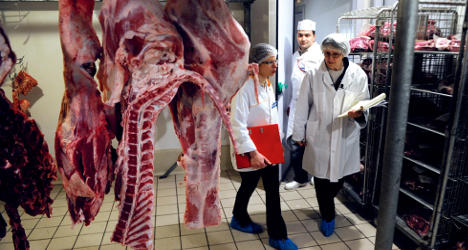 Around a hundred officers from France’s gendarmerie took part in the operation on Monday that was aimed at dismantling a network behind the illegal trading of horsemeat that was unfit for human consumption.

The latest scandal around horsemeat to hit France involves reports that horses that had been used for medical research in laboratories were then sold off to butchers across the south of France, instead of being put down.

According to reports the scam saw hundreds of horses illegally sold off into the meat industry between 2010 and 2012, France 3 reported.

The animals, which were bought from Sanofi Pasteur research labs, should have been destroyed, but after their health records were forged they were then sold off to abattoirs and passed on to butchers throughout the south of France.

The probe also involved police in Spain as one of the slaughterhouses involved in the network is believed to be in Gerona.

Under French law any animal that was subject to medical testing cannot then be sold off for the purpose of human consumption.

The raids were carried out in connection with a probe launched following the horsemeat scandal that hit Europe earlier this year.

Most of the raids took part in the South of France – in Languedoc-Roussillon, Provence, the Côte d’Azur and Midi-Pyrénées.

Police said 21 people were arrested in total. Among those held were at least three vets and several meat dealers, including one based in Narbonne in southwestern France who is suspected of being the ringleader of the illicit trade, police sources said.

Sanofi said in a statement that the company was cooperating with the investigation into "possible fraud" and that it had sold around 200 horses in the last three years, generally to veterinary colleges, individuals or horse centres.

A police source told AFP the Sanofi horses would have been used either to provide blood for use in vaccines or for testing drugs still in development.

"That does not mean to say that these horses pose a risk for the consumer but they should never have found their way on to diners' plates," the source said.

In February France was at the centre of a European wide scandal when it emerged that ready meals being sold in supermarkets across the continent, were labelled as beef despite containing horsemeat.

The country's Consumer Affairs Minister Benoit Hamon said on Monday the latest scandal was very different to the one that gripped Europe in February.

“That was about commercial fraud. In this case it could be about health problems. It is different,” he said.

The European Commission then revealed that thousands of DNA tests on European beef products revealed extensive food fraud across the European Union, with almost one in 20 meats marketed as beef likely to be tainted with horse.

More than 4,000 tests were carried out to detect the potential mislabelling of beef products showed 193 products containing traces of horsemeat DNA, or 4.55 percent.

Since the scare exploded in Britain and France in early February, governments have scrambled to figure out how the mislabelling occurred which saw thousands of meat products being pulled off shelves across the continent.

At the heart of the scandal was French firm Spanghero.

French authorities said Spanghero, based in the southern town of Castelnaudary, knowingly sold 750 tonnes of horsemeat mislabelled as beef over a period of six months.

Spanghero's sanitary licence was revoked and the company, which had employed 360 workers before the scandal, closed shop in June. It resumed activities two months later with new management and backed by two new financiers.

In September eight managers from Spanghero were arrested and placed under formal investigation.