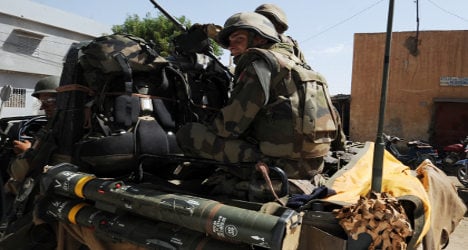 A French military source in the Malian capital, Bamako, said "military operations are ongoing" after French troops killed 19 militants in the area on Tuesday.

"A very large military operation is under way, the largest in the Timbuktu region since allied forces retook the main northern cities," said an African military source in Timbuktu.

Mali is battling to restore stability after Al-Qaeda-linked radicals seized control of its northern half, submitting it to a brutal form of Islamic law for nine months.

A French-led operation launched in January drove them out, but troops are still fighting jihadists hiding out in the vast northern desert.

At least 20 French helicopters were taking part in the operation against Al-Qaeda in the Islamic Maghreb, along with ground vehicles, said a Malian military source.

"About 20 jihadists have already been killed north of Timbuktu," said the Malian source.

He said the French were now targeting the area around Taoudeni, about 750 kilometres (450 miles) north of Timbuktu city — the capital of the region of the same name.

The area "has become a refuge for terrorists and drug traffickers", he said.

The operation came as the west African country, a former French colony, prepared to vote Sunday in a second round of legislative elections — the fourth time it has gone to the polls in less than six months.

The vote is the final stage in Mali's return to democracy after a March 2012 coup that threw it into turmoil and opened a power vacuum that enabled Islamists to seize the north.

French forces have been in Mali for almost a year, fighting alongside troops from various African countries that have been incorporated into a United Nations peacekeeping force known as MINUSMA.

After several months of calm, jihadist groups launched fresh attacks in September, killing a dozen people including civilians and Malian and other African troops.

A French military source in Bamako said Tuesday there was still a "pretty determined group" of fighters north of Timbuktu.