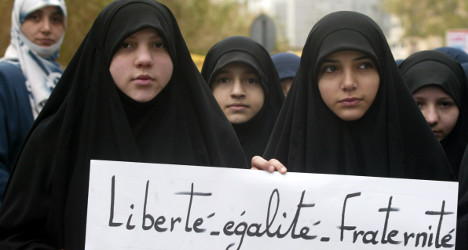 France's decision to ban religious symbols in schools in 2004 sparked protests around the world, including this one in Lebanon. Will the ban soon be overturned? Photo: Joseph Barrak/AFP

France's controversial ban on the wearing of  the Muslim veil in schools was once again making headlines on Friday, almost ten years after it was introduced.

On Friday France’s Prime Minister Jean-Marc Ayrault  was handed a report that he had commissioned in the summer, that will form the basis of future reforms aimed at better "integrating" France's immigrant communities. The reforms will eventually be put to parliament in 2014.

He will sit down with ministers from his goverment to discuss the report's findings in January next year.

One proposal in particular has grabbed the most attention in France on Friday and it forms part of an overall plan to abolish various discriminatory measures, that the authors claim hinder integration.

In order “to recognise the richness of multiple identities”, the report urges France to authorize the wearing of the veil in schools, something that was outlawed in 2004.

The controversial 2004 law prohibits the wearing or open display of religious symbols in all French schools and colleges, including crucifixes, Jewish skull caps and the Muslim headscarf  – the Hijab.

The law was inspired by France’s principles of secularism and equality and the belief that schools and public buildings should be a neutral environment where people are not identified by their religion.

Former French PM François Fillon was one of the first to speak out against the report's findings.

"I must warn the prime minister about the dangers of applying these proposals. They will work to divide the French and would feed extremism," Fillon said in a statement.

However the chances of the proposal being taken on appear slim, as things stand as it would require a major shift in public opinion.

An opinion poll in October 2012 revealed 89 percent of French people said they were against the Islamic veil being worn in public schools.

Nevertheless the new report has opened up the old debate and the French public and politicians are once agin being asked to express their views on an issue that will seemingly never be put to rest.

("Your opinion: Should we look again at the law banning the veil in schools", asks French radio RTL.)

For their part politicians have already poured cold water on the chances of the ban being overturned.

“I don’t envisage that we will return to the law on the veil,” said Thierry Mandon the spokesman for the Socialist group in the National Assembly, who compared the government to over eager students, who can go to far and end up with "risky" formulas.

The question of integration has long been a spikey issue in France and one of the perhaps more obscure recommendations the report makes is that France should drop the term "integration" altogether as a symbolic measure.

Instead all talk should be of “making France" (Faire France) or "living together equally" (vivre ensemble egalitaire).

"We want to change the approach to integration," said a spokesman for the PM's office. "We are moving towards a policy strongly anchored on equal rights and the fight against discrimination."

In his letter to the authors of the report Ayrault made it clear that integration will only succeed "if we accept that the rich legacy of migrants over the ages is part of the French identity."

One of the other notable recommendations France is urged to undertake is to recognise the "North African dimension of its identity". This can be done by "enhancing the teaching of Arabic in schools as well as proposing other African languages."

Other proposals include the creation of a new crime of "racial harassment" and a new court of  auditors (cour des comptes) on equality.