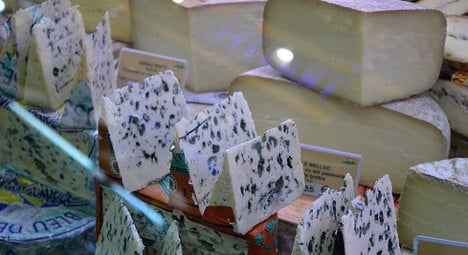 Roquefort had been banned in Brazil for three years. Photo: Milistan/flickr

The president, backed by France’s agriculture minister, has managed to persuade authorities in Brazil to allow the famous ‘Made in France’ Roquefort cheese to return to Brazilian dinner tables.

The blue cheese made from sheep’s milk had been banned in Brazil since 2010, but a three-year long battle to have the embargo lifted, was finally resolved this week.

“It’s done!” announced France’s agriculture minister Guillaume Garot to the media on Thursday. “The necessary health certificate for the importation of Roquefort has been signed,” he said, adding that the lifting of the embargo will take effect immediately.

The issue that prompted the ban to be implemented in the first place was due to health issues related to the temperature at which the cheese matured and French controls on raw milk and animals.

But after bilateral “technical discussions” of the cheese the impasse was broken.

French cheeses, especially the stronger ones, have often aroused concerns abroad and led to bitter disputes at times.

In July this year The Local reported how the US defiantly upheld its ban on the beloved Mimolette cheese, labelling it “putrid” and “unfit for food”.

After a three-month blockade of more than a tonne of imported Mimolette cheese at warehouses throughout the US, officials caused disbelief by implementing a ban.

A ‘charge statement’ from the Food and Drug Administration in the US claimed: “The article appears to consist in whole or in part of a filthy, putrid, or decomposed substance or be otherwise unfit for food.”

The furore revolves around the use of microscopic mites, deliberately introduced to the grey surface of the cheese, to refine its flavour.

Naturally the French found that hard to swallow and a Facebook page emerged entitled 'Save the Mimolette’ that quickly gathered thousands of 'likes'.

During his trip to Brazil this week President Francois Hollande said France and Brazil should double trade between them, as he met his counterpart Dilma Rousseff here on Thursday at the start of a two-day state visit.

"Despite the crisis, our trade exchanges have steadily increased and have even doubled in ten years," said the French leader, with Rousseff at his side.

"We have big ambitions, Brazil and France, to double our trade again in the coming years," he added.

"We have had a strategic partnership between the two countries since 2006," Hollande said, adding "We must strengthen it".

She said Brazil would acquire a supercomputer from France, which will set up centers in this country and transfer supercomputing technology.

Rousseff said the stepped-up exchanges illustrated the growing trend by French and international entrepreneurs "to link the prosperity of their companies to the Brazilian market".