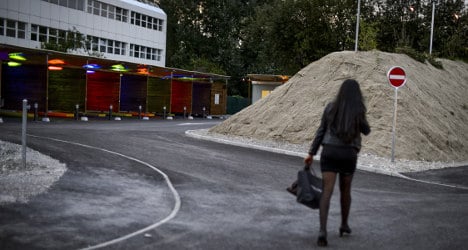 A prostitute arrives at a brothel in Zurich, Switzerland. Will French sex workers flee across the border when their clients are penalized under a new French law? Photo: Fabrice Coffrini/AFP

With prostitutes in France claiming a new law to hit clients with €1,500 fines, will make their lives more dangerous, fears have been raised that many sex workers will simply opt to ply their trade across the border.

With prostitution legal in neighbouring Germany and Switzerland, authorities there predict a mass migration of French sex-workers and their clients.

Charlotte Britz, mayor of the German border town of Saarbrücken, told AFP: "I am really worried about what this French law is going to mean for us.”

France's new law is expected to come into force in the second half of next year.

Given that prostitution is legal throughout Germany, Britz cannot ban it, but she is planning to restrict it to certain areas and is examining the city of Dortmund's moves to discourage street-walking through a tax.

Germany legalized prostitution in 2002, lawmakers having concluded that attempts to eliminate it through criminalization were doomed to fail and that it would be better if the women involved were able to make social security payments, enjoy health care and work in a safer environment.

The law has come under fire recently from critics who argue that legalization has largely benefited pimps and brothel owners.

Michael Beretin, an entrepreneur planning to open a 4,500-square-metre (50,000-square-foot) super brothel in a village near Saarbrücken in the next few months, is also planning to take advantage of the French law.

"We are expecting a lot of clients from France, given how close we are and given the changes in the law," Beretin said. Frenchmen already account for 65 percent of the business in a nearby brothel.

The new super brothel has billed itself as a state-of-the-art, "classy" venue, but, according to local resident Armin Beyer, 63, such places will do nothing to improve the lot of pavement walkers.

Beyer has grown tired of seeing dozens of women waiting for kerb crawlers on his way home from work, and fears that the human misery that lies behind such scenes will only be accentuated by France's well-intentioned reform.

"When France starts penalizing the clients, there is going to be an avalanche here," he predicts.

Similar predictions are being made in Switzerland, where border towns like Geneva are already home to scores of sex workers from across the border in France and those numbers are expected to swell once the French change in law comes into force.

“We do not need to wait for the law to see the effects on this side of the border,” said Swiss newspaper 24 Heures.

“Even in the last few days sources say there have been many more knocks at the doors of Swiss massage parlours and escort agencies,” the newspaper reported.

French radio RTL reported earlier this week how one brothel in Geneva had been inundated with applications from sex workers, many of whom were French.

But some believe France’s latest crackdown on prostitution will have less impact than feared due to the fact that prostitutes have been heading from France to Switzerland for years, as they tried to escape France’s tougher laws.

The new plan to penalize clients is just the latest attempt by France to crackdown on prostitution and follows Nicolas Sarkozy’s 2003 law that banned “passive soliciting”.

“French girls have been coming here for a long time. Geneva is already full of them,” a member of staff at a massage parlour told The Local. “I am not certain whether the law will see more come here. I think it will just continue as normal.”

Another worker at a massage parlour in the city told RTL why French sex-workers prefer to seek exile in Switzerland.

“It’s a question of ambience and working conditions. In Switzerland security is much better than in France,” she said.