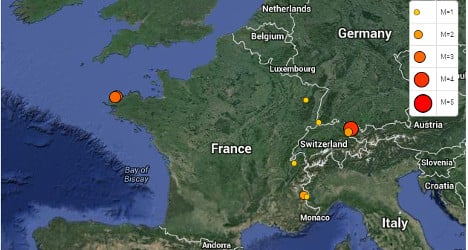 An earthquake measuring 3.5 on the Richter scale shook parts of Brittany on Wednesday night with a second tremor recorded early on Thursday morning. Photo: Screengrab/Renass

The earthquake occurred at 11:49 pm in Le Finistère in the extreme west of the region on Wednesday night, with another tremor reported at around 3:22am, regional newspaper Ouest-France reported.

The first tremor was felt at around 11:50 pm for around six to eight seconds in the centre and outskirts of Brest, accompanied by a faint rumble, Ouest-France said, citing witnesses.

According to France’s Central Bureau of Seismology (BCSF), the quake measured 3.5 on the Richter scale.

The quake’s epicentre was located 15 km away in north-western Chateaulin.

A second tremor was reported at around 3:22 am early on Thursday morning.

According to the head office of military enforcement, the epicentre of the second tremor was between the town of Logonna-Daoulas and l'Hôpital-Camfrout in Le Finistère, with a reported magnitude of 3.4.

This figure has yet to be confirmed by a seismologist.

Brittany residents took to Twitter and Facebook to report the tremors, after similar seismic events just three weeks ago.

“Another tremor at 3:23… It’s big here. It should stop now. Sleep,” tweeted insomniac @HChambo in the early hours of the morning.

Others, however, apparently slept soundly without feeling a thing.

“Going on Facebook this morning I see that everyone has put that there was an earthquake last night and, well, I didn’t feel anything,” tweeted @_Memelle29.

The quake is the second to hit the region since November when a quake measuring 4.5 hit Morbihan.

Another quake measuring 4 on the Richter scale shook the region on October 11th. Since 1970, the earthquake with the highest magnitude in the region was recorded on September 30th 2002, measuring 5.7, according to Ouest-France.

The latest seismic event comes amid growing concern that the French are dangerously unprepared for the natural disasters that most of the country is exposed to.

A survey this month by polling firm Ifop found that 78 percent of French people were unaware of what to do in the event that France’s national alert system is triggered, and 63 percent didn’t know the risks that their geographical location exposed them to, Le Parisien reported last week.

Meanwhile, at a conference on Natural Hazards in the south-western city of Bordeaux last week, some 700 experts in risk prevention gathered to talk about what could be done to educate the French people about the risk of natural disasters and how the damage could be limited.