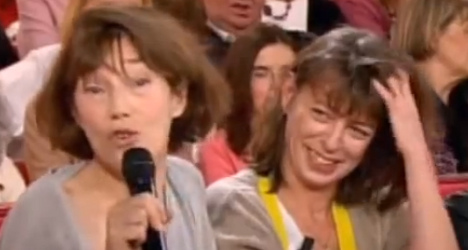 (L) Singer and actress Jane Birkin, who was married to French singer Serge Gainsbourg, appears on French TV with her daughter Kate Barry (R), who died on Wednesday. Photo: France2/Screengrab

According to a source, Barry, 46, fell from her home in a chic area of the French capital. She apparently fell from a window and was found on the pavement outside her apartment in the 16th arrondissement.

Barry lived alone in the apartment that was locked from the inside. Anti-depressants were found in her home, according to the source.

A police spokesman told the press that the matter "was under investigation" and confirmed the death.

Barry was the daughter of British-born Birkin and British composer John Barry, famous for writing James Bond movie themes, who died in 2011.

Birkin and John Barry separated the year of Kate Barry's  birth in 1967 and she was brought up until her teenage years by Birkin and Serge Gainsbourg.

Kate Barry was also the half-sister of actresses Charlotte Gainsbourg and Lou Doillon.

French Culture Minister Aurelie Filippetti paid rich tribute to Kate Barry on Thursday, saying that her "loving and heartfelt thoughts" were with a "family we all love".

Barry had studied fashion but turned to photography later. She had drug and alcohol problems which prompted her to open a centre for addicts near Paris.

"Her fragility touched us," Filippetti said, adding that Barry was an outstanding photographer whose "sense of light and composition was very pictorial".

Birkin, who herself lives on the Left Bank in Paris, has often spoken about the close relationship she shares with her daughters.

"I've never had a week without having all three of my daughters on the telephone," she said in an interview earlier this year.

"My eldest daughter, Kate, looks most like me. She's a photographer. She had a Polaroid camera in her hand from a young age and photographed her sisters all the time."