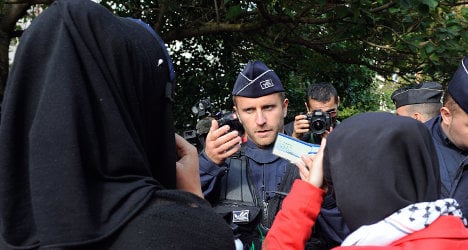 The arrest of a woman in a Paris suburb for wearing a full-face vale was the trigger for riots earleir this year. A lawyer is set to challenge the ban on Wednesday. File photo: Denis Charlet/AFP

The court in Versailles, outside Paris, will hear arguments from the lawyer of Cassandra Belin, 20, that the ban on the veil – in place since 2011 – is discriminatory and unconstitutional but she will shun the hearing.

"She does not want to be wrongly perceived  as the symbol of a supposed rampant Islamisation," Belin's lawyer Philippe Bataille said.

Belin, who converted to Islam at the age of 15, was stopped by police in the gritty town of Trappes west of Paris on July 18 – during the Muslim Ramadan fasting period – for wearing the veil in public.

An altercation ensued and her husband Michael Khiri was arrested, accused of insulting a police officer.

He was later found guilty and got a three-month suspended sentence. The incident sparked riots in Trappes, which has a large immigrant population.

The ensuing violence drew hundreds of protestors. They set fire to bins, destroyed bus stops and hurled stones at police.

Belin went on trial in October for defying the ban and insulting a police officer but her lawyer launched a constitutional challenge and the Versailles court postponed the case to Wednesday to consider defence claims that the
charges are unconstitutional.

Bataille says the ban impinges on freedom of religion, of movement and goes against human dignity.

The controversial ban on garments that cover the face was introduced on the ground that French authorities say the law is needed to protect the country's secular traditions and for security reasons.

But many then interpreted it as a sign targeting Islamic veils, arguing that helmets worn by motorcyclists also covered the face.

Belin has admitted telling the police officers to "shut up" but denied saying "Allah will exterminate you."

In a parallel case, one of the three officers involved in the incident is being investigated for using Islamophobic language on Facebook and for "inciting hatred and racial discrimination."

Belin's lawyer has also said that identity checks were being misused by some police officers to harrass veiled women.

But the police officers' lawyer Thibault de Montbrial said that a "small group of radical elements were testing the institutions" of the French Republic, which is officially secular, under the guise of religious freedom.

The case of Belin is not the only legal challenge to France's controversial ban on the full-face veil in public. Earlier this month European judges heard the case of a 23-year-old French woman who claims the country's highly contentious ban on full-face veils violates her rights.

The Strasbourg-based European Court of Human Rights (ECHR) heard arguments in the case brought by a plaintiff known only by her initials SAS, with a ruling expected in early 2014.

French authorities say the law is needed to protect the country's secular traditions and for security reasons.