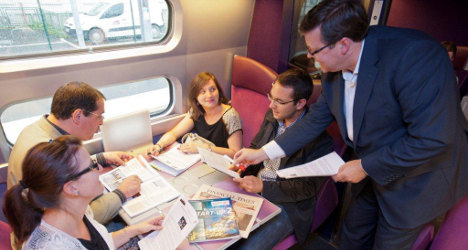 Calum MacDougall is the man behind English on Track – an innovative new project to teach French professionals English while travelling to and from work on France’s rail network.

When he first arrived in the country more than 30 years ago, however, he was in a very different world.

Back in 2006, in the third decade of a highly successful career in finance, the Scotsman did the unthinkable – he packed it all in, and struck out on his own.

Changing paths, however, was far from a haphazard process for MacDougall, a self-confessed “reformed banker.”

In a lesson for any expat thinking about starting a new career in France, he tells The Local how he took the skills and experience he got from his old job, and put them to use doing something completely different.

How did you first end up in France?

Well, all the way back in 1980, I was a business student at what was then Middlesex Polytechnic, and I had the chance to go and study and work in Reims for two years.

It was a great way to perfect my French and get a good grounding in finance.

Where did your career take you after university?

I joined Barclays and worked here in Paris for seven years with them, dealing in particular with broker-dealers.

Over the years I’ve worked for British, American and French banks, mostly in France, but I also spent a few years in Amsterdam working for a French institution.

So why did you leave a stable, successful career like that?

Well, back in the early 2000s, I just began to feel that the world of finance had started to lose its shine. I had a chance to leave in 2006, and that’s what I did.

I’d always wanted to start my own business, and I thought – “It’s now or never.” So I got my TEFL qualification here in Paris, and joined my wife as an English teacher.

How were you able to make use of your career in finance as an English teacher?

When I started out I taught everyone from small children to business clients, but all the while I was studying the market, and taking a careful look at trends in English teaching.

When I worked in finance I did a little bit of everything – operations, sales, customer relations – and used all of these skills in analysing and mapping out my own English teaching business.

I was travelling around France a lot, coming into businesses and teaching executives, and I saw all these French professionals spending hours sitting on trains, like me.

I thought – all that time isn’t being used properly, it’s being wasted. So the idea of teaching English to commuters began to grow.

I had a chance meeting with someone from [French rail operator] SNCF, and that got the ball rolling for English on Track.

SEE ALSO: "It's easy to start a business in France" So how’s it going so far?

We have four or five lessons a week, 45 minutes to an hour each, with small, dynamic groups of equal language ability, which is really constructive.

We’re teaching people from the hi-tech sector, journalists, export managers – a really wide variety. The beauty of it is that these people’s employers are delighted with the scheme.

It’s a very efficient use of time – essentially they’re doing a training course before they’ve even arrived at the office, and about 80 percent are having the lessons paid for by their employers.

The next logical step for us would be to work on the Eurostar, but we’re still at the pilot stage, and we’ll just have to see how it goes.

What advice would you give another expat thinking of a career change in France?

Here’s the key – look very carefully at your key competencies and skills, no matter what your old job was, and ask yourself how they could apply to a new profession.

And you have to be organized. Remember that there is always a risk involved in a career change, and to really get things off the ground, you’ll need about two or three years.

So make sure you have your finances in good order before you make the leap – because you’ll need them.