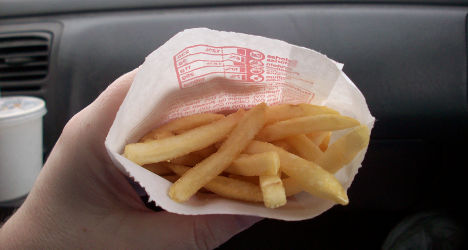 Ever been let down by cold fries? A customer at a McDonald's drive-thru near Paris recently, dealt with the disappointment by launching a terrifying axe attack. File Photo: Alisha Vargas

We’ve all been let down from time to time by the discrepancy between what appears in fast food commercials, and what we get served in reality.

But for one McDonald’s customer near Paris late on Saturday night, the disappointment was too much to take, it would appear.

According to French daily Le Parisien, a customer at a drive-thru restaurant at Garges-lès-Gonesse, in the northern suburbs of the French capital, didn’t take kindly to the temperature of his fries, after pulling up to the fast-food outlet on Avenue de Stalingrad at around 2am on Saturday night.

After complaining they were too cold, and apparently not getting satisfaction from the staff-member behind the drive-thru counter, the 26-year-old man descended from his Renault Master van, brandishing an axe.

The incident escalated rapidly, as the enraged man swung his axe at the drive-thru counter, smashing the glass window to pieces.

Apparently not convinced he had made his feelings clear, he then threw the axe into the restaurant itself, where it landed amid a group of terrified late-night diners, narrowly missing them. The angry McDonald’s customer drove off in his van, and attempted to flee police officers, who had been tipped off by witnesses.

In the end, however, he was stopped and arrested by law enforcement, who found him bleeding heavily from a deep wound in his right arm, apparently incurred during the attack on the drive-thru counter.

Emergency services were called to the scene and patched up the deeply dissatisfied customer, a local man, before he was taken in for questioning  by police.

The 35-year-old McDonald’s employee with the misfortune to be working the drive-thru counter at the time of the incident, suffered cuts to the face from fragments of the shattered glass window, but was not hospitalized, according to Le Parisien.