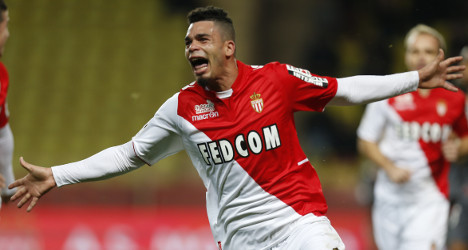 Monaco's Emmanuel Riviere scores against Ajaccio on Sunday to push his side into second place behind PSG. Photo: Valery Hache/AFP

Emmanuel Riviere scored his eighth goal of the season to give Monaco a 1-0 win over 10-man Ajaccio on Sunday and cut the gap on Ligue 1 leaders Paris Saint-Germain to two points.

Riviere struck in the 75th minute as Monaco replaced Lille, who had lost 1-0 at Bordeaux earlier in the day, in second spot.

PSG stayed top on Saturday with a 5-0 demolition of rock-bottom Sochaux.

"Ajaccio played very deep but I saw that we had a desire to win. I am satisfied with three points."

With top scorer Radamel Falcao out of action with a thigh strain for a third successive match, Monaco's scoring onus once again fell on the shoulders of his Colombian compatriot James Rodriguez who had netted twice in his last two games.

But it was Anthony Martial who had the first shot on target after 16 minutes with the teenager's fierce drive well-saved by Ajaccio's Mexican goalkeeper Francisco Ochoa.

Martial again came close early in the second half but a diving header went just wide.

Ajaccio's task became even tougher just after the hour mark when Jean-Baptiste Pierazzi was red-carded for a foul on Rodriguez.

Once Riviere had grabbed the deserved lead, Monaco twice came close to increasing their lead with Rodriguez and Portuguese international Joao Moutinho both denied by the woodwork from free-kicks.

Nigerian goalkeeper Vincent Enyeama's run of not conceding a goal ended after 1,062 minutes on Sunday with an own goal by Lille team-mate Simon Kjaer in the clash with Bordeaux.

The Danish defender deflected a harmless looking shot by Bordeaux's Landry N'Guemo which tantalizingly hit the post before entering the net in the 28th minute.

It was the first time Enyeama had had to pick the ball out of his net since September 15th in the 2-0 defeat by Nice.

It also proved to be the only goal of the game.

The big Swede took his league goals tally to 13 thanks to an all-round masterclass which helped PSG quickly recover from their midweek loss to Evian in what was their first defeat of the season.

That setback ended PSG's 36-match undefeated run and it was Sochaux who were cast in the role of fall guys on Saturday.

Ibrahimovic scored twice in the last five minutes after Thiago Silva, Ezequiel Lavezzi and Edinson Cavani, with his 11th of the season, had also hit the target.

"They play a lot but they are the major players in our team," said Blanc.

"All big clubs need their most important players. There are just two more matches until the winter break and the league is our objective as we have already done our work in the Champions League (PSG are certain of a last 16 place).

"I will try to put together the best team possible to take the points in these two league games.