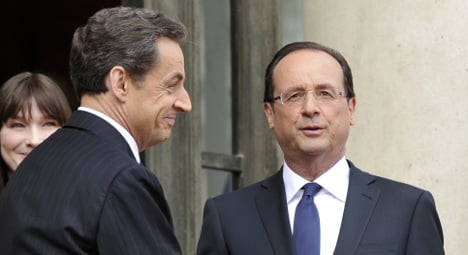 George Bush and Barack Obama might be flying to Johannesburg together but it seems bitter enemies François Hollande and Nicolas Sarkozy are not ready to sit through a long-haul flight together.

The current and former presidents of France will head to Nelson Mandela’s memorial service on Tuesday in separate planes, it has been revealed, after Sarkozy had reportedly turned down Hollande’s invitation to travel with him on the 11-hour flight.

Hollande was commended for inviting Sarkozy to attend Mandela’s service on Tuesday, an offer described by the Elysée as a “Republican gesture” born out of the need  to show “national unity”.

Sarkozy immediately accepted the invitation to go but apparently declined an offer to travel on board the presidential Airbus A330, perhaps not wanting to set foot inside a plane he knows so well from his own time as head of state.

According to Le Parisien newspaper the two men, whose relationship can be described as hostile at best, will now travel in two separate Falcon jets on Monday evening. Le Parisien estimates the cost to be €286,000 to the tax payer, which the Elysée claims is cheaper than if they had taken the Airbus 330. A third Falcon will also travel to South Africa, with security staff and advisors on board.

A source in Hollande's entourage told the newspaper on Monday that two planes would head to South Africa at the same time for "technical, practical and economic reasons".

Although many have heralded the fact the two adversaries will appear together at the memorial service, the separate travel arrangements have not been lost on the French media. It has been pointed out that unlike Sarkozy and Hollande, former US Republican president George W Bush and current head of state Barack Obama are prepared to share the same air space together and will both be travelling to South Africa on Air Force 1.

Roux points out that Mandela’s message of forgiveness and reconciliation has perhaps been lost on the two Frenchmen, who are however, expected to sit side by side at the memorial service.

“You have to believe the spirit of Mandela will infuse French politics, although you can bet it will only last the length of time of the funeral,” she said.

Sarkozy and Hollande’s relationship soured during a bitter presidential election campaign and has yet to thaw despite Hollande being in office for over a year and half.

Sarkozy was reportedly unhappy with Hollande’s lack of respect shown during the official handover ceremony and the Socialist president was also slammed by Sarkozy's allies for a jibe at his predecessor.

After a young boy approached him at the Agricultural Fair in Paris earlier this year and said “I have never seen Nicolas Sarkozy”, Hollande smiled and replied “Oh well, you’ll never see him again.”

Many in politics expect Sarkozy to make a return to the fold next year with the aim of trying to win back the presidency in 2017.