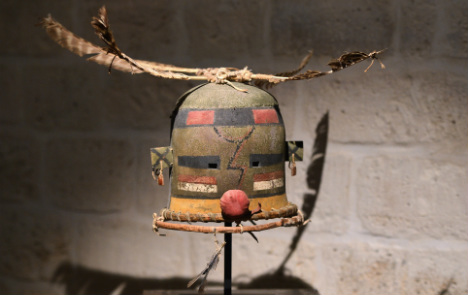 A number of ceremonial masks and head-dresses are due to go under the hammer at the EVE auction house on Monday and Tuesday after the failure of a legal challenge by advocacy group Survival International.

The US embassy in Paris became involved on Saturday, with Charge d'Affaires Mark Taplin delivering a letter to the auction house requesting a last-minute delay in the sale.

"The Embassy made this request on behalf of the two tribes so that they might have the opportunity to identify the objects, investigate their provenance and determine whether they have a claim to recover the items under the 1970 UNESCO Convention on the Export and Transfer of Ownership of Cultural Property, to which France is a signatory, or under other laws," the embassy said in a statement.

The embassy added that the objects being offered for sale were of great importance to the Arizona-based Hopi and San Carlos Apache peoples and should not be offered for sale "precipitously and in the absence of consultation with the two tribes."

The battle is a rerun of one earlier this year in which French firm Neret-Minet ignored international appeals to halt the sale of some 70 masks that eventually fetched around €930,000 ($1.3 million).

That auction was decried as sacrilege by activists including Hollywood legend Robert Redford.

The sale of sacred Native American artefacts has been outlawed in the United States since 1990 but there is no equivalent legislation in France.

Ruling on Friday on Survival International's appeal for the auction to be suspended, judge Claire David said any moral or philosophical considerations could not justify preventing a legal sale going ahead.