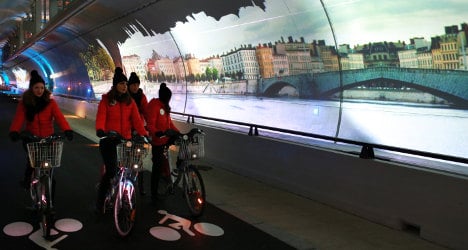 A group of cyclists marvel at the video projections and sound effects of Lyon's new eco-friendly underground tunnel - a "world first" according to the city's mayor. Photo: Philippe Merle/AFP

The tunnel under the Lyon's city centre Croix-Rousse hill, known as “Le Tube”, was opened to the public for the first time on Thursday evening, amid much local fanfare.

“This is a world first, and just like with the Festival of Lights, we will soon be imitated,” Lyon mayor Gérard Collomb told the assembled French media on Thursday.

The Croix-Rousse hill already has a car tunnel stretching under it, bringing together the Saône and Rhône rivers, and Thursday’s innovation effectively adds a second route to that passage, according to AFP.

The newly-opened Tube allows buses to pass on one lane, with cyclists and pedestrians sharing the other.

Traffic on the route is not yet 100-percent green, given the diesel fuel used by certain buses, but regional official Jean-Luc de Passano on Thursday told AFP that "four types of hybrid bus are in a trial period" in the city of Lyon. With the help of Paris company Skertzo, travellers can enjoy an eccentric mix of sound effects on their trip, and the walls of the two-kilometre tunnel are emblazoned with spectacular, shifting projections of everything from abstract art to a virtual garden.

The “art installation” feel is in keeping with the city of Lyon’s world-famous annual Fête des Lumières (Festival of Lights), which is set to begin on Friday evening.

The tunnel, now open to the public, will shut down nightly between 12.30 am and 5 am.

So what it’s like? Enjoy the sights and sounds of one cyclist’s first trip across the brand new tunnel, with this condensed, “handlebar-cam” video.