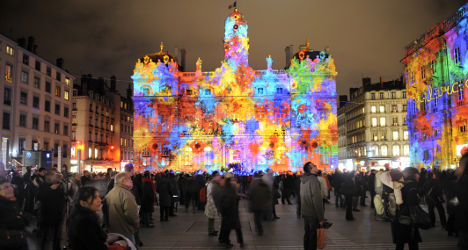 Dozens of spectacular light shows are set to illuminate Lyon this weekend, for the highlight of the eastern city’s calendar – the annual Festival of Lights. Photo: Fred Dufour/AFP

If you around the Rhône-Alpes region of France between Friday and Monday, you could do a lot worse than to head to Lyon for the city’s 15th annual Fête des Lumières – the Festival of Lights.

Organizers are expecting up to four million visitors from around France and throughout the world to make their way to the historical city in central France this weekend.

Between 6pm on Friday and 10pm on Monday, Lyon will be emblazoned with up to 80 different light shows, projections, animations, parades, and art installations, according to the city’s website.

As a flavour of what to expect, here are a few images of some of the spectacular displays that had the crowds ooh-ing and aah-ing across the city. For all the information and details you could possibly need on how to get there, what’s going on all four nights, and what the Festival of Lights is all about, go to the official website (in English).

To whet your appetite for this year’s fête, or to satisfy your curiosity about the whole thing, settle in for this breathtaking video of last year’s “Night-time Trance” light show at the city’s iconic Place des Terreaux.