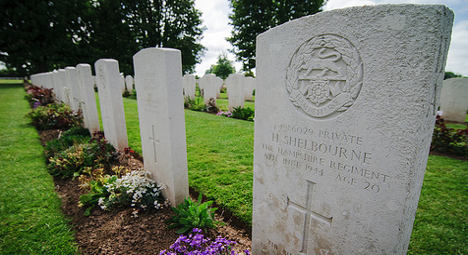 Thousands of British and Canadian gravestones are to be replaced for D-Day anniversiary. Photo: Archangel/Flickr

The project aims to replace 8,329 headstones in three cemeteries by the end of spring, in time for the anniversary of the June 6th, 1944 allied landings a Normandy, said William Moody of the Commonwealth War Graves Commission (CWGC).

"Often it's impossible to read what's written on them, like the name of the soldier, the regiment's insignia, the date of death, his age and his religion," Moody told AFP.

The stones, made of white English limestone and measuring about one metre (three feet) high, have never before been replaced. Workers began exchanging them a month ago, replacing them with marble-like stone from Botticino in Italy.

A French and a Belgian company are carrying out the work. The old stones will be destroyed, Moody said.

The three sites are the British cemetery in the town of Bayeux, the Canadian cemetery in Cinthaux and the cemetery in Ranville, the first village in France to be liberated from Nazi German occupation.

The cemeteries also hold the remains of German, Italian, Russian, Polish and Czech soldiers, as well as others of unknown nationality.

The CWGC, which runs 3,000 cemeteries in France, is funded by countries according to the number of soldiers they have buried in its graves, with the British government providing 78 percent of its budget.