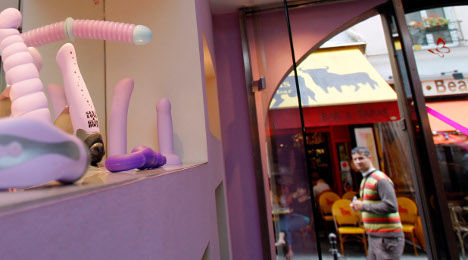 Nicolas Busnel, whose shop, named "1969 Desirable Curiosities" was 90 metres from a local primary school, was forced to close last year, following a complaint from a Christian group, the CLER Love and Family.

Busnel was later convicted over violation of child protection laws for selling his products within 200 metres of a primary school.

The verdict had been denounced by Busnel’s lawyer as being based on "the most retrograde morality and the most worrying puritanism". Busnel lodged an appeal against the decision but on Thursday his legal battle appeared dead in the water when a Paris court confirmed his conviction.

"This is a sensible decision. An eight-year-old child coming out of the school should not be able to come face to face with an array of sex toys, " said Henri de Beauregard, the lawyer for the associaton CLER Love and Family

His lawyer Richard Malka had previously argued that no court had ever ruled that a sex toy was pornographic.

In defence, Malka responded “I don’t want to know anything about these objects,” adding there was no proof they were sold by the shop.

He then hit back by pulling out a rubber duck and other items sold in the shop, in a bid to demonstrate to judges that they were not pornographic.

Malka also stressed that no child or parent or teacher had ever complained about the presence of the sex shop near the school.

"France is today the only country in the Western world to consider a vibrating duck as a pornographic object," Malka said.

He argued the restriction would make it nearly impossible for anyone to open a sex shop in densely populated central Paris.

"This decision will inevitably lead to a ban in a capital of the Western world on all businesses selling sex toys," he said.

He now has ten days to lodge an appeal.