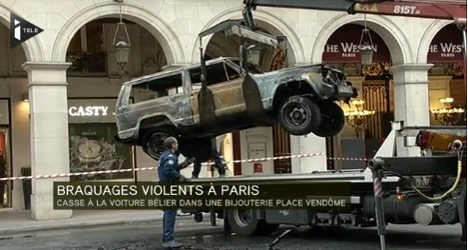 Armed robbers on Thursday raided a jewellery store near the posh Place Vendôme in Paris, making off with luxury watches worth €800,000 ($1 million), a source close to the investigation said.

Brandishing hand guns, they threatened the employees of the outlet in the heart of the French capital, the source said.

France has witnessed a series of robberies of luxury jewellery stores in recent months.

In September four men rammed their car into an upmarket jewellery store in the same square, smashing the shop window and making off with a €2 million ($2.6-million) booty, a police source said.

There was also a brazen attack by axe and sledgehammer-wielding men at a Vacheron Constantin store near Place Vendôme. They stole watches worth hundreds of thousands of euros.

Other heists have taken place in the fashionable Riviera playground of Cannes.

In a spectacular robbery, jewel thieves made off with baubles worth $1.4 million due to be loaned to movie stars at the Cannes film festival in May.

The spurt in crime spawned an unprecedented phenomenon: massive support on social networking site Facebook for an elderly jeweller who shot dead a teenage robber in September.