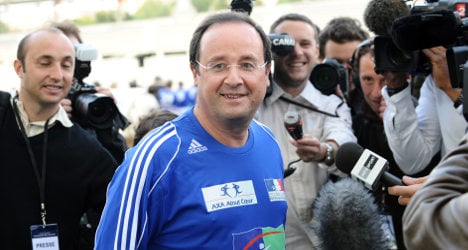 François Hollande's health was the subject of speculation in France on Wednesday after it emerged he had been secretly operated on in 2011. Photo: Patrick Herzog/AFP

French President François Hollande revealed on Wednesday he was hospitalized in February 2011 to be treated for a benign enlargement of the prostate.

Hollande's office stressed that the enlargement had been benign and had had no lasting impact on the 59-year-old Socialist leader's health.

But the revelation nevertheless topped news bulletins in France, where the president's health is a sensitive issue as a result of former leaders having covered up serious health problems for years.

"The President of the Republic Francois Hollande confirms that in February 2011, he was hospitalized for a few days in a urology service at Cochin hospital for a benign prostatic hypertrophy," the presidency said in a statement.

The statement said "no medical follow-up was deemed necessary after the operation," which was why Hollande's advisors believed it was not necessary to reveal details of the operation.

The surgery took place shortly before he launched his campaign to become the Socialist party's presidential candidate to go up against Nicolas Sarkozy.

The Elysée Palace was forced to release the statement after radio station FranceInfo published details of the surgery on Wednesday morning.

Opposition UMP deputy Bernard Debré, who was head of the Urology service at Cochin hospital, where Hollande was admitted told RFI radio that he didn't believe the president had purposefully tried to keep news of his surgery from reaching the public.

"Just because journalists did not know about it, it does not mean he was trying to hide it," Debré said.

Many believe that having an enlarged prostate means having an increased risk of developing prostate cancer.  But, according to medical experts, that is not the case.

"Having an enlarged prostate does not increase or reduce your risk of developing prostate cancer," said French urology professor Aurelien Descazeaud.

"When people have surgery for an enlargement, the surgeon takes the opportunity to check for any sign of cancer at the same time but the two conditions have strictly nothing to do with each other."

In the past Hollande’s weight has been subject of much attention in the media and the fact he looked a lot trimmer during his election campaign did not go unnoticed.

When taking up his seat in the Elysée in May 2012, Hollande pledged to publish a personal health report every six months for the sake of transparency. The first was in June, shortly after being elected and the second was in March 2013 in which he said tests showed everything was “normal”.

The French Prime Minister Jean-Marc Ayrault tried to calm any fears over Hollande's health by insisting "there was nothing to worry about".

“I do not have to provide information regarding someone’s private life,” said the PM, who was reluctant to be interviewed. But Ayrault said there was “no reason to be worried”.

The health of presidents is a sensitive subject in France.

Georges Pompidou died in 1974 while still in office, having hidden the fact he was suffering from cancer.

François Mitterrand covered up his prostate cancer for years, and his successor Jacques Chirac suffered a stroke in 2005, three years after he was re-elected as president.

According to the website of Britain's National Health Service, benign prostatic hypertrophy, or prostate enlargement, is a common condition that affects older men. It is usually not a serious threat to health.

The prostate, a small gland found only in men, is located between the penis and bladder.

The cause of enlargement is unknown but most experts believe it is linked to changes in hormone levels that occur as men get older.

The symptoms associated with an enlarged prostate are similar to some of those linked to prostate cancer. These can include general discomfort and urinating frequently or with difficulty.

These symptoms can be relieved through medication or, as in Hollande's case, with surgery under either a local or general anaesthetic.