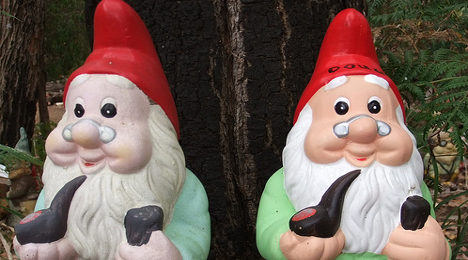 A Frenchman, aged 81, has been jailed after a violent row over missing garden gnomes. Photo: Oatsy81/Flickr

The court in Libourne, near the city of Bordeaux, heard this week how a row between the man and his neighbour over missing garden gnomes quickly descended into violence and could have ended in tragedy, according to the victim’s lawyer.

The very un-neighbourly spat dates back to May 2012 when the 81-year-old, from Lussac confronted his neighbour over the whereabouts of his missing gnomes, which were a treasured possession of his deceased wife, French newspaper SudOuest reports.

The fuming octogenarian was clearly prepared to do whatever it took to find out the truth and armed himself with a knife and a can of fuel.

He set fire to his neighbour’s door, bombarded him with insults and threats and then finally, when hearing that the gnomes had been sold, attacked the 52-year-old man with the knife.

The victim, who for his part armed himself with a pick axe handle, was left bloodied and had to be taken to hospital in Libourne. Luckily he was not seriously wounded.

“This could have ended so tragically,” said Delphine Chudziak, the lawyer for the victim.

“This man arrived with a container full of fuel and it's only down to luck that he was hit with the handle of the knife, rather than the blade.

“I leave it up to the court to decide the best way to punish this man, whom all his neighbours described as rude and threatening,” Chudziak added, before claiming €2,000 ($2,718) in compensation for the physical and psychological harm done to her client.

For his part the 81-year-old’s lawyer said there were extenuating circumstances around the attack.

“The gnomes symbolized all the love this man had for his wife, who died too young,” before adding that his client had left the village.

“You will not hear of this young delinquent again,” he jokingly assured the court.

But judges proved unsympathetic to the lawyer’s arguments and sentenced the 81-year-old to one month behind bars. He was also ordered to pay €400 ($543) in damages to the victim.

As for the gnomes, the police managed to track them down, several weeks after the violence and return them to their owner.