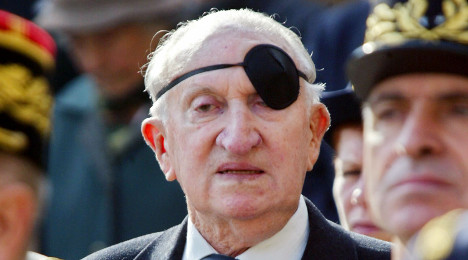 Aussaresses, who in 2004 was fined 7,500 euros ($10,200) for defending torture and had his membership of the prestigious Order of the Legion d'Honneur removed by then President Jacques Chirac, died Tuesday.

According to his wife Elvire, he was "one of the most decorated officers in the French army".

Part of the intelligence services in Algiers – the capital of the former French colony of Algeria – during the 1954-1962 war, he admitted in May 2001 having used torture, which he said was "tolerated, and even recommended" by politicians at the time.

He said torture "becomes legitimate" when there are urgent needs, sparking a storm of controversy and leading to his 2004 sentencing.

Born in November 1918 in the southern French department of Tarn, Aussaresses volunteered for the secret services in 1941 and later took part in the creation of the "11e Choc", an elite parachute regiment that used to serve as the armed branch of the external intelligence agency.

He was deployed to Indochina, another part of France's colonial empire that grouped Vietnam, Laos and Cambodia and where the French fought a bloody war of independence from 1946 to 1954.

In 1957 he was asked to go to Algiers to restore order, and became the head of what he called a "death squadron" that was charged with making nocturnal arrests, using torture and, in some cases, killing some of those detained.

Did torture "pose problems for me? I have to say it didn't. I had got used to all that", he later said.