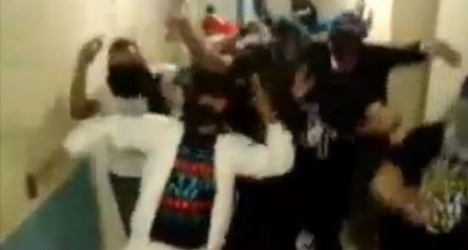 Management at the prison in Montmédy, in the eastern department of Meuse, announced this week they had opened an investigation into inmates as well as guards, after the emergence of two mysterious videos apparently taken inside prison walls.

Since news of the clips made it into the French press on Tuesday they have been viewed thousands of times.

The video that has garnered the most attention is the second clip posted on November 21st, which shows around a dozen inmates, faces covered, dancing in a prison hallway, one of them brandishing a stick, and another a chair.

Entitled “Harlem Shake Gangster D-Ter,” the video appears to have been taken using a smartphone, and had a music track overlayed afterwards, suggesting it wasn’t uploaded to the internet from prison, but by an individual on the outside.

The first and perhaps more concerning video, uploaded to Youtube on November 16th, appears to show a prisoner from a gang known as “Gangster D-Ter”, smoking a joint while wearing the jacket of a prison guard.

A role-playing conversation ensues between one inmate, who takes on the character of a prison guard and an unseen man behind the camera, who is presumed to be a fellow prisoner. The conversation goes as follows:

Cameraman: “What are you up to there?”

Cameraman: “But they’re the ones who pay you.”

Inmate:”So what? So they pay me, those sons of bitches”

Cameraman: “If all the guards were like you, prison would be great.”

It remains unknown, however, exactly how the videos were made, when mobile phones of any kind are forbidden among French prison inmates.

“An administrative inquiry is in progress, in order to understand in what conditions this was able to happen,” authorities at the prison told local newspaper Est Republicain on Tuesday.

“This inquiry [will relate to] inmates, as well as to any guards implicated,” they added.This isn’t the first time in recent months that French prison authorities have faced tough questions over security measures.

In September, The Local reported how the detention centre at Toul, in eastern France, looked set to face legal proceedings after a four-year-old boy was raped by an inmate during a conjugal visit from the boy's mother, who aided in the horrific assault.

At the detention centre, Sabrina Bonner had blindfolded her son and made him kneel on a chair in front of her partner Lionel Barthelemy, then held him by the arms as he was raped. The case raised questions over why prison staff failed to stop, or even notice, an act of such brutality taking place during what was supposed to be a supervised visit to a prisoner serving a sentence for domestic violence, who had been diagnosed as having schizophrenic tendencies.

Investigators had found that black bin bags were used to cover the glass window of the door of the visiting room.

Furthermore, Bonner admitted carrying out multiple sexual assaults on her child during 2009 and 2010, filming them on her mobile phone and giving the phone's memory card to her imprisoned partner.

During the summer, record overcrowding in French jails provoked something of a revolt among prison guards, with hundreds protesting outside their places of work.