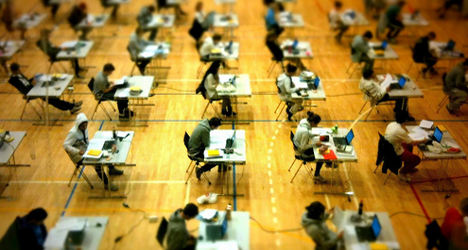 The performance of French pupils has dipped compared to other nationalities, the OECD Pisa report published on Tuesday concluded. Photo: Rune Mathison/flickr

The three-yearly Pisa report by the Paris-based Organization of Economic Cooperation and Development (OCED) published on Tuesday revealed that France has dropped three places in the global rankings compared to 2009, the last time the study was carried out.

The overall rankings for 2012, based on the performances of 15-year-olds in maths, science and reading, were dominated by Asian countries with France coming in 25th place out of 65.

However despite the fall France was still ranked ahead of the UK, which was placed 26th overall and the US, which occupied 36th position in the table. However ‘l’école de Jules Ferry’ as France’s education system is often referred to, came in behind Germany (16th) and Ireland (20th).

While France’s Education Minister Vincent Peillon may have been expecting the end-of-year report, which once again could be summed as “could do better”, certain conclusions made in the Pisa (Programme for International Student Assessment) report will give the Socialist government particular cause for concern.

Most notably the equality gap which continues to widen and which France appears unable to deal with.

“The French education system is more unequal in 2012 than it was nine years ago and social inequalities have worsened especially between 2003 and 2006.

“In France if you belong to a disadvantaged background you are clearly less likely to succeed today than in 2003," the report concludes.

The number of students who are in difficulty in maths stands at 43 percent in France compared to 16 percent in Australia and Canada for example.

Students from disadvantaged backgrounds in France are not only likely to get lower grades, “they will also be less involved or committed to school and much more anxious compared to the OECD average.

“This is the annoying point for the French system,” OECD analyst Eric Charbonnier told Les Echos newspaper. “We have been talking about this for a long time and we have the impression that it is inevitable. There is inequality and we can do nothing about it.”

Charbonnier points out that other nations like Germany, Portugal and Poland have carried out reforms aimed at easing the problem.

“There is a willingness in other countries to act against inequality but France is still trying to put together the pieces of the puzzle.”

The study also concluded that students from France’s immigrant families are also twice as likely to find themselves “in difficulty”.

Although France’s performance in mathematics has dropped between 2003 and 2012 there was good news on the writing front, where the 2012 results showed an improvement, which left France above average when compared to other OECD countries.