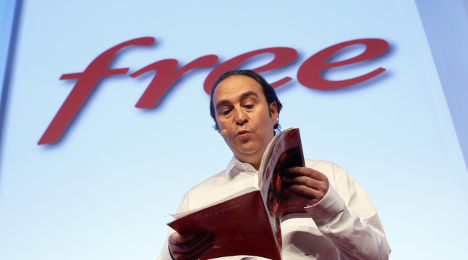 The creator of French mobile phone firm Free Xavier Niel has once again stirred up the market by annoucing a seemingly unbeatable offer. Photo: Thomas Coex/AFP

The company — which burst into existence by pushing down prices for home telephone, television and Internet service – did the same for mobile phones when it became France's fourth operator in 2012.

The mobile market in France was thrown into turmoil when Free launched and imcediately offered monthly contracts for as little as €2.

Forced into a price war, France's main operators – Orange, SFR and Bouygues -saw earnings slump, but were hoping to recover by charging a premium for the new generation service.

Although Free became instantly famous for its unbeatable prices it was also notorious for its poor coverage in certain areas.

Shortly after their announcement on Tuesday France’s Consumer Affairs Minister Benoit Hamon “invited customers to check the maps showing the coverage before making their choice.”

Hamon and Fluer Pellerin, the minister for small businesses also sent out a reminder that mobile companies were required to offer clear information to customers about the extent of their coverage.

Free's owner Xavier Niel also said on Tuesday it would provide even more data as part of is standard 20 euro ($27) per month package.